I purchased a pair of ultralight snowshoes this winter designed for mountaineering and winter backpacking that are manufactured by a company called Northern Lites. Weighing just 43 oz per pair, these 30″ snowshoes are 57 oz lighter than 30″ MSR Lightning Ascents which weigh 100 oz per pair.

I got these snowshoes because I’ve been hell-bent on getting my winter backpacking base weight under 40 lbs. Climbing a 4,000 footer with 4+ pound snowshoes lashed to your pack is no fun and I wanted a lighter alternative. I have some friends who buy childrens-sized snowshoes for just this reason, but I wasn’t ready to go that route. 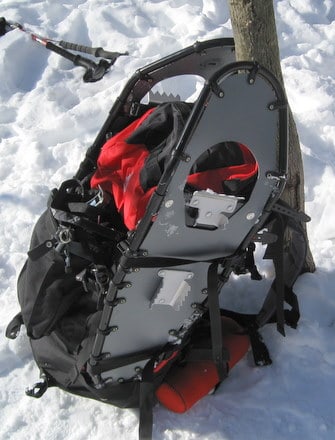 The experience of snowshoeing in Northern Lites is different from other snowshoes that I own or have tried. First off, they are unbelievably lightweight. This makes a real difference if you are hiking in double plastic boots because they are a lot less fatiguing. But they also flex slightly when you step on a rock or log. This is due to the use of much lighter weight aluminum framing, aluminum crampons and plastic decking that are used in their manufacture.

Northern Lites takes a very different design philosophy than other commercial snowshoe manufacturers. Instead of using a heavy and very stiff aluminum frame, they use a thinner, lighter one, but compensate for the resulting lack if rigidity by using decking that is 250% stronger and way lighter than the decking you find on other teardrop style snowshoes. The decking is attached to the frame at many more spots than other snowshoes enabling the decking to supplement the frame’s strength instead of just being used for flotation. 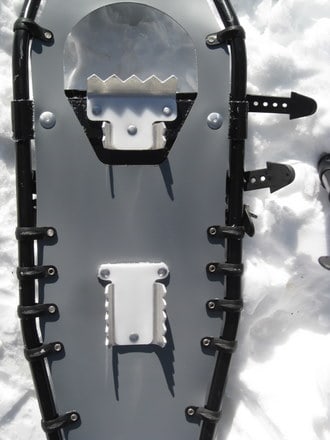 Additional weight is further reduced by using aluminum instead of steel for the crampons, which have deicing plates to improve traction. The foot and heel crampons are further augmented by adding plastic crampon teeth under each decking attachment point, increasing contact between the snowshoe or ice and crusty snow.

This can be good or bad depending on where you intend to snowshoe. Aluminum crampons are weaker than steel and will wear down quickly if you have to traverse a lot of rock. You can resharpen the crampons with a file, but this will reduce their lifetime. Still, I’m happy to make these trade-offs since I usually bring along steel crampons anyway. 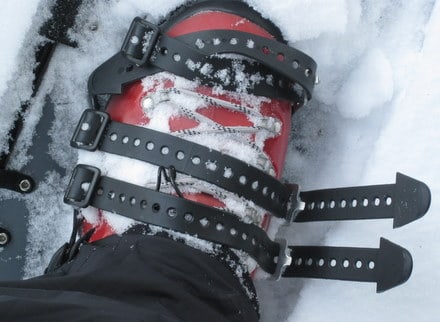 The bindings on my Northern Lites are easy to adjust and stay reliably shut. When you put on a pair of Northern Lites, you should position your boot or shoe about 1 inch past the edge of the front hole and tighten the straps over your foot. There’s no need to make them real tight. An additional nylon strap loops behind your heel to keep your shoes from sliding out of the binding.

Unfortunately, my Northern Lites didn’t come with any documentation so figuring out how to use the binding system took a little bit of experimentation. For example, one question I had was which way the pointy ends of the straps should face: to the inside or outside of your stride. All of the photos on the company’s web site show them pointing at each other, which I found very annoying because the straps on the left foot smack against the straps on your right foot. After a while, I just put them on so the pointy ends point outward: left and right are interchangeable, and that was that.

There’s also no way to fasten down straps if they’re too long, so they flap around a bit. One way to fix this is to slip them under the other end where it runs over your boot, as shown above. This seems like a little thing that is easy to fix, and I may just use velcro tape to fasten the ends down if I continue to find them distracting.

Overall, I am very pleased with my Northern Lite Backcountry snowshoes, but they’re clearly not for everyone. The huge weight reduction they provide is fantastic, but if you’re not carrying a pack into the backcountry or that’s not a concern for you, you may be better off considering a snowshoe that’s not targeted at ultralight mountaineering or winter backpacking applications.