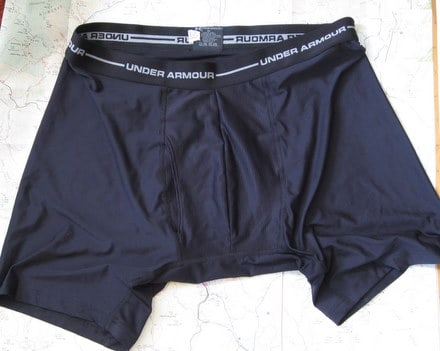 Wearing long pants can be a challenge when the weather warms up and you start to sweat more. It’s times like these when you need good wicking underwear that will move moisture away from your skin and prevent thigh chafing.

The material used to make HeatGear boxer jocks is a lot thinner and lighter weight than the fabric found in normal UA compression shorts and they have a looser, less supportive fit in the crotch area which is far more comfortable, but could potentially pose a problem on high mileage days due to increased friction between body parts. (Was that discretely said?)

Last weekend, I tested 6 and 9 inch pairs of HeatGear boxerjocks on two 10 mile, fast paced hikes, wearing a full pack in hot and humid weather.  I sweated a lot, but not nearly as much as I would if I had been wearing my heavier Under Armour compression shorts. Both of the leg lengths I tested worked fine, but the 6″ pair soaked more around my important parts and between my thighs than the 9″ pair, which I suspect is simply because the shorter pair has less fabric. This could become an issue on higher mileage days and being paranoid about such things, I am going to use the 9″ pair on my next backpacking trip instead of the 6″ pair. I hope to bag another 20+ mile day in the next week or so on the Appalachian Trail in Vermont, which will be the ultimate test of this new underwear.

Previous Ticks, Lyme, and Permethrin
Next AT Section Hike: Hannover to Killington