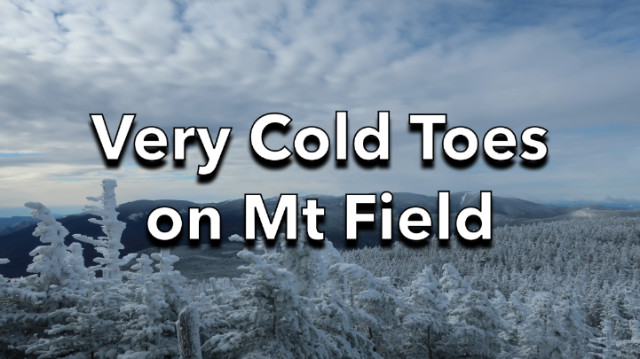 Crawford Notch is one of the big mountain passes in the White Mountains and the dividing line between two mountain ranges, the Southern Presidentials leading to Mt Washington and the Willey Range, which forms the steep western wall of the notch opposite Webster Cliff. The Willey Range includes three peaks: Mt Willey, Mt Field, and Mt Tom. Willey and Field were my planned destinations for the day since I’d already climbed Mt Tom in November for my 4000 Footer Grid.

Original Route Plan – Out and back

My plan was to climb Field via the Avalon Trail which is quite steep, then head out to Willey, and then retrace my steps back to Crawford Notch. While calendar winter is still a few weeks away (approx. Dec 21), I was dressed in full winter gear and carried a winter load in my pack. In some ways, the shoulder season between autumn and winter is harder than full-on winter, because you need to carry clothing and traction that can span both seasons. For instance, it’s not uncommon to encounter running water on the trails at lower elevations, only to encounter thick ice flows and snowdrifts the higher you climb.

That was not the case on this hike, however. The trailhead in Crawford Notch already had snow and one poor sod was already trying to dig his car out of a snowbank (aided by a platoon of volunteers) as I crossed the railroad to start my hike. I was hiking by myself on this trip and felt comfortable with that decision. I’ve been up these peaks many times in all seasons and I knew there would be a lot of other hikers out in case I ran into trouble.

I started up the A-Z trail and put on a pair of Hillsound Ultras (microspikes) before crossing a partially bridged stream. The trail climbs steadily after the stream through hardwoods. One thing you notice when you climb the forty-eight four thousand footers month after month is how much the landscape changes from season to season. While I’ve hiked in the Whites a lot, and I mean a real lot, I haven’t climbed that many 4000 footers in November, December, April, or May, which are the shoulder season months when trail conditions on the higher peaks are often downright nasty. Those are usually good months to stay low on the trails that are last to become snowbound or that melt out early at the end of winter.

But when you hike during these shoulder season months, you get to experience the landscape in a new way. When the leaves from the trees have fallen, you can see the topology of the landscape and the watercourses that run alongside the trails so much more clearly. It makes everything look a lot different and even very familiar trails appear transformed.

I turned onto the Avalon Trail at the next junction and started climbing. This trail has undergone a massive transformation in recent years by trial crews that have widened it and made it much less obscure. It could be very difficult to follow, just a few years ago, and I suspect I’ve climbed it more than once accidentally off the official route. That was almost the case on this hike when I missed a fork in the trail and followed the packed-out trail made by other hikers who’d also missed that turn. I quickly realized my mistake and backtracked to the blazed fork which I’d passed previously. Going up the right trail is much easier than the alternative.

While both of those climbs are steep, the first one really gets your attention. In my case, I was ascending early in the day, so the trail, which is a run of boulders in what might generously be called a staircase, was still covered in a dusting of snow, over what turned out to be very hard ice. Caution was required, which meant choosing my foot placement carefully. While microspikes do provide an increased level of traction, you can’t really dig them into ice the way you can with full crampons. They work best on packed snow on early ice but aren’t as trustworthy on wet ice, smooth ice flows, or more angled surfaces. Careful footwork is still required so I took my time on the ascent while wondering if it would be prudent to take a longer but safer route back down on my return.

As I climbed, I noticed that my toes were getting pretty cold. I could still wiggle them inside my boots, but they didn’t feel right. I was wearing 200g insulated mids, which might have been a borderline decision with the snow depth, but I’ve used them on other climbs in snow recently without any major issues. Except one maybe, and that is that front of my microspikes can press down on the front of my left boot, in particular, and cause friction on top of my toes. I’m always worried that this friction will create a hot spot and a blister, but it never has. I often let the front of my microspikes slip to the side of the front of my boots, which helps relieve that pressure somewhat.

When I got to the top of the first climb, I took a break, ate some gorp, and drank some of my hot water. That helped warm me up and my toes felt a bit better. I packed up and started up the second half of the Avalon Trail towards the Willey Range Trail. I came to a sunny opening on the trail that lifted my mood before I entered the woods again and started to next steep climb.

But my toes got colder and really started to hurt. This was not good. I have big winter hiking plans and I needed to keep those toes happy. I stopped hiking and dug out the stuff sack that I keep my emergency gear in. I pulled out two plastic bread bags, took off my boots, and slipped them over my socks. This creates a vapor barrier around the toes that has helped keep them warmer in the past. I booted back up and started climbing again.

I was pretty close to summiting Mt Field and decided to hold on until then and make a go-no-go decision about continuing to Willey. I also took off my microspikes because I suspected that the pressure they were exerting on my toes was limiting the bloodstream to them and the root cause of my cold toes. I knew I’d have to put them back on for the steep portions of my descent, but that they were big chunks of the route where I could keep them off.

I finished the climb to the Willey Range Trail and hiked up to the summit of Field which is only 0.1 miles away. My toes were still cold. I took in the view, chatted with a few other hikers, had a sandwich and hot water, and decided to cut my route short and exit. That’s kind of a bummer because I still need to climb Willey next November for my 4000 footer grid, but it is what it is.

I started my descent, only putting on my microspikes when needed for the steepest portion of the Avalon Trail. My toes did warm back up eventually near the end of the hike, but my left foot ached for a few days afterward. I switched to a different pair of 400-gram insulated boots a few days later and climbed South and Middle Carter, but experienced cold toes again, which was relieved by removing my microspikes.

I have a few options going forward: I can change my boots to something with a more rigid toe, I can change my microspikes to something that causes less toe pressure, or modify the microspikes somehow. I’m pursuing all these options in parallel. In the short term, I plan to switch to Kahtoola K10 crampons, which are in between microspikes and glacier crampons. They have a different binding system that doesn’t use an elastomer strap and doesn’t exert so much pressure on the toes. That’s not optimal because they have much longer spikes and are harder to walk with on mixed rock and snow, but it’s a short-term fix until I can field a better option.

Editor's note: If you’re thinking about buying gear that we’ve reviewed or recommend on SectionHiker, you can help support us in the process. Just click on any of the seller links above, and if you make a purchase, we may (but not always) receive a small percentage of the transaction. The cost of the product is the same to you but this helps us continue to test and write unsponsored and independent gear reviews, beginner FAQs, and free hiking guides. Thanks and we appreciate your support!
Previous Wolverine ShiftPlus Polar Range Boots Review
Next Dachstein Extreme Warm Wool Mittens Review