What is a 4 Season Tent? 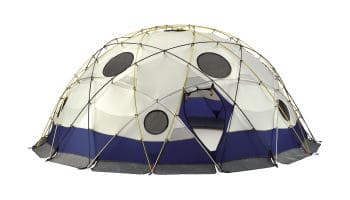 
“What is the difference between a four season tent and a three season tent?” It’s a good question because the distinction is blurry. Moreover the phrase “four season tent” is a misnomer since it refers to winter tents, which you might not use the rest of the year because they could be too heavy or too hot.

The chief differences between winter tents and three season ones are wind resistance and the ability to withstand heavy snow fall. Consequently, winter tents typically come with an extra rigid exoskeleton and have steeply angled sides.

The Mountain Hardware Stronghold is an extreme example of this but useful for illustration. The Stronghold comes with 15 external poles to hold up to the strong wind gusts found at high elevation base camps. The geodesic shape and its high angle walls are effective in shedding snow and help maximize interior space. An external fly also adds more rigidity.

In addition, it’s also important to have good venting and a vestibule in a winter tent.

Good venting prevents internal frost build-up. When you exhale in winter, the moisture in your breath will freeze to the roof and sides of your shelter. This becomes problematic as your body heat warms the tent’s interior because the frost will melt and make you and your gear wet.

Vestibules provide a transition zone for you to remove and store gear that has been covered in snow or ice. You want to bring as little snow as possible into your tent because it will raise the relative humidity of its micro-climate and accelerate internal frost build-up. Make sure to carefully brush out any snow that gets inside.

If it’s very windy outside and you need to melt snow or cook, a vestibule can act as a wind break, but you need to be very careful not to catch your tent on fire or suffocate from carbon monoxide poisoning. Personally, I avoid cooking and eating in a tent, but eating and drinking in winter is important to keep up your metabolism and stay warm. One trick is to dig a square pit under your vestibule to make it easier to remove wet gear and to increase the distance between your stove and the vestibule ceiling.

Rain flies and floors are not necessary components in a winter tent or shelter.

For example, I own a Black Diamond First Light tent that I use for winter backpacking. It’s a single walled tent made from a breathable fabric called EPIC and its weighs well under three pounds

Given proper waterproof and insulation layers under your sleeping bag, there is also no need for your tent or shelter to have a floor for winter camping. Floorless pyramids (called Mids) are popular as a lightweight option in winter because they can withstand heavy wind, moderate snowfall and have great venting properties. Black Diamond and Mountain Laurel Designs make these.

Depending on size and capacity, winter tents and shelters range in price from about $250 dollars to $6,000. The most popular brands are Black Diamond, Hilleberg, and The North Face. Many of these are quite heavy and need to be carried in pieces by multiple members of your party. I’ve found that bringing a one person lightweight shelter is often lighter than carrying a piece of a heavier tent, but that’s just my preference.

If you own a 4 season tent, what do you have and why do you like it?

Previous Tips and Tricks: How to Pack a Food Bag
Next MYOG: A Gravity-fed Water Filtration System using the Sawyer Mini Water Filter by Nathan Taylor