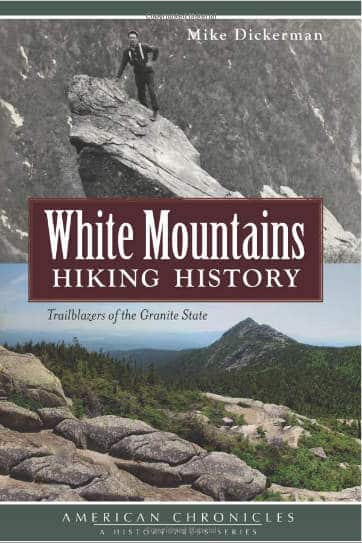 I have been fascinated by the construction and development of the White Mountain Hiking Trail System, with its 1400+ miles of hiking trails, ever since I walked the Westside Trail on Mt Washington, an alpine trail where huge rocks from the surrounding boulder fields are precisely fit together like a cobblestone road. This trail and many others were constructed by master trail builder J. Rayner Edmands during the heyday of White Mountain Trail Construction from 1890-1920.

In White Mountains Hiking History: Trail Blazers of the Granite State, Mike Dickerman focuses on the period between the construction of the historic Crawford Path in 1819 through 1920 when the White Mountain trail system was unified with major trunk paths connecting one region to another. Dickerman, former co-editor of the timeless Appalachian Mountain Club’s White Mountain Guide has written many books about the White Mountains based on primary sources including journals, maps, and newspaper articles. An avid hiker and newspaper columnist, Dickerman’s books are easy to read and help bring to life the personalities, organizations, and social and economic forces that helped develop the White Mountain’s world-class trail system.

The first trails in the White Mountains were built by inn owners starting in 1819 to provide their guests with recreational opportunities to climb Mt Washington, the highest peak in the region. While some people hiked up these trails, they were soon transformed into bridle paths so visitors could ride horses and sit in wagons as they climbed the mountains.

By the 1850s, travel to the White Mountains became significantly less tedious with the construction of rail lines connecting the region to Boston and New York, where it became a fashionable summertime destination for the upper classes to escape the heat and filth of Northeast’s big cities. The railroads ushered in an era of grand hotels and summit houses situated on many of the high peaks of the region, which served as regional hubs for more trail building.

Subsequent waves of trail construction occurred in the 1920’s to the 1940’s were spurred by the dismantling of lumber railroads (which made for excellent trails) after passage of the Weeks Act in 1911 and the Civilian Conservation Corp which worked in the White Mountains from 1933 – 1942.

While many hiking clubs and community organizations played a role in developing the White Mountain Trail system, none played as large a role as the Appalachian Mountain Club formed in 1876, particularly in helping to link together the regional trail systems built in the White Mountain Area. For instance, the AMC built trails on Webster Cliff, Garfield Ridge, Ammonoosuc Ravine, Kinsman Ridge, the Mahoosucs, the Twinway, to Nancy Pond, Wildcat Ridge, Franconia Ridge, the Gulfside, Israel Ridge, The Link, The Randolph Path, Great Gulf, Chandler Brook, Six Husbands, Adams Slide, Swift River, Raymond Path, and the Watson Path, many of which are still main thoroughfares in the Whites.

While not a complete history of the White Mountains, Dickerman’s Trail Blazers is an entertaining and informative read for students of the region interested in the origins and evolution of the trail system and provides additional depth to the history of Northeastern trail building covered in Guy and Laura Waterman’s classic Forest and Crag.

Philip Werner has hiked and backpacked over 7500 miles in the United States and the UK and written over 2500 articles as the founder of SectionHiker.com, noted for its backpacking gear reviews and hiking FAQs. A devotee of New Hampshire and Maine hiking and backpacking, Philip is the 36th person to hike all 650 of the hiking trails in the White Mountain Guide, a distance of approximately 2500 miles, completing a second round in 2021. Philip is the author of Backpacking the White Mountain 4000 Footers, a free online guidebook of the best backpacking trips in the White Mountains in New Hampshire and Maine. He lives in New Hampshire.
Previous New Sleeping Pad R-Value Standard FAQ: ASTM FF3340
Next Firm Grip Blizzard Insulated Gloves Review