A History of the Gunk’s Carriageways

I love hiking in the Shawangunks (also known as the Gunks) in eastern New York State, near the Mohonk Mountain House and Preserve. This entire area is a hiking and rock climbing paradise. 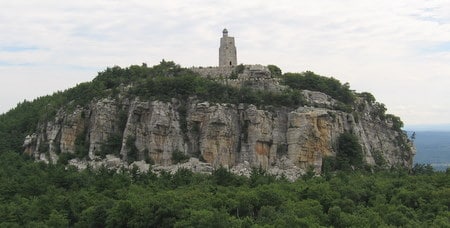 One of the unique features of the Gunks is the stone and gravel carriageways that weave through the rugged terrain of the Mohonk Preserve and Minnewaska State Park. Originally built in the late 1800s and early 1900s, the carriageway system was the brainchild of Alfred Smiley, one of the owners of the Mohonk Mountain House. His vision was to create a system of roadways, hiking trails, and viewpoints for guests to experience the sublime grandeur of the surrounding area: we’re talking about landscape architecture on a grandiose scale. For example, the photo above shows Skytop, a tower built by Smiley, that overlooks the Mohonk Mountain House and provides 50-mile views of the Catskills and the Hudson River Valley on a clear day. 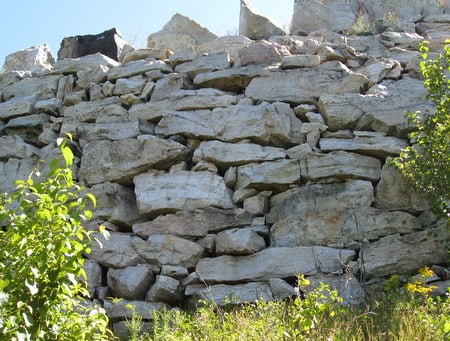 The carriageways were a central component of Smiley’s vision and I’ve always wanted to find out more about who built them and how they were constructed. To this day, they are still engineering marvels when you consider how long they’ve lasted and how difficult it must have been to build them in what was then a rural wilderness area in the late nineteenth century.

Last week, I was vacationing in the Gunks and visited Joan LaChance, the head of the Mohonk Archives to learn more about the history of the carriageway system and how it was constructed. She found some old photos for me, taken in the winter of 1924, showing different views of the construction process and the tools that were used.

It turns out that the carriageways were constructed in the wintertime when guests were not present at Mohonk or its sister resorts. The work was supervised by Alfred Smiley, Albert Smiley’s brother. Albert, the landscape visionary, didn’t like spending cold winters in the Gunks, so he would go to California each winter leaving behind Alfred to manage the carriageway construction effort. Alfred would update Albert by sending him photographs of the progress being made, and the photos Joan found in the archive were from a communication between the brothers.

The carriageways, like the one in the photo above, were constructed from the local conglomerate common in this area. Many of the men in the area were skilled at dressing the stone since it was commonly used for local construction. The rest of the workforce was comprised of local farmers, who were out of work in the winter and worked on the carriageways to earn extra income. The tools they used were fairly primitive, including pulleys, crowbars, steam-powered jackhammers, horse-drawn sleds for carrying crushed stone, and dynamite for blasting roads into the mountainsides.

Joan also provided me with a list of when each carriage road was constructed for the period between 1870 and 1925. Since then, no additional carriageways have been added to the 100-mile carriageway system, and most construction efforts today are focused on the conservation of this Victorian treasure.