Backpacking in the White Mountains: A Quick and Dirty Guide 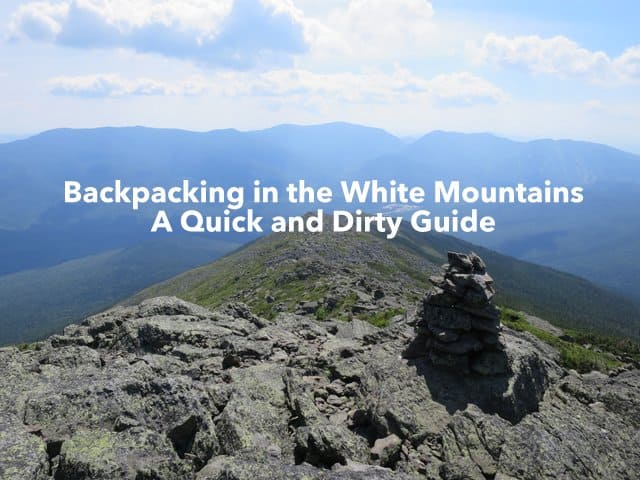 Nearly 800,000 acres in size, the White Mountain National Forest contains 6 designated Wilderness Areas, which make up about 20% of its total acreage. These areas are kept deliberately primitive with little road access, few man-made structures, and less signage, trail blazing, and trail maintenance. Motorized equipment and bicycles are also prohibited in the Wilderness Areas and groups cannot be larger than 10 people in size. Food caching and geocaching are also prohibited.

You will need a car to drive to the White Mountains and get around it. While there is interstate access, via I-93, all of the roads through and around the periphery of the region are two-lane highways. There’s very little bus service from major cities like Boston and no public transportation in the forest itself. The AMC has a very expensive shuttle service between trailheads and there are a few private shuttle drivers, who mainly service Appalachian Trail hikers.

Some internal roads are seasonal and gated closed in winter (which generally lasts from mid-November into May.) These roads are worth learning about if you plan to spend time in the Whites because they provide nice shortcuts and access to many remote areas. Delorme Gazetteers (map books) for New Hampshire and Maine can be quite useful for finding them.

There are several towns with restaurants, motels, food stores located around the periphery of the National Forest. These are Lincoln, Twin Mountain, Conway, North Conway, Jackson, Gorham, Berlin, Plymouth, Woodstock, and Warren.

Most trailhead lots are free, but those with bathrooms often require payment of a day fee. You can buy a weeklong or annual parking pass at the National Forest Welcome centers in Lincoln and Campton which is often worth it. Cars are generally safe when parked, but break-ins do occur at some popular trailheads in summer. The usual advice prevails: don’t keep valuables or personally identifiable information in your car and hide possessions in covered storage.

The White Mountains have over 500 trails, including the oldest hiking trails in the United States. The trail system is highly connected, making it possible to create quite scenic multi-day trips. There’s a misconception that the White Mountains trail system is managed by the Appalachian Mountain Club. That’s incorrect. The trail system is managed and maintained by the United States Forest Service and many regional trail organizations, many of which are volunteer-based. Some also maintain cabins or camping areas that are open to the public (marked below with an *).

With the exception of the Appalachian Trail and its white blazes, White Mountain trails are quite lightly blazed, primarily in yellow, but it varies. The trails are relatively easy to follow if you pay attention to the placement of the tread and other clues, except when they’re covered by snow, or in early spring when covered by winter debris. Trails above-treeline are usually marked with rock cairns, but these can be hard to spot when the mist is down.

The signage at trail junctions is quite good, but you do need to carry a waterproof map, at the very least, to help you remember which trail to follow or take if bad weather forces you to modify your plans. A compass is also particularly helpful in low visibility above-treeline. I carry both, always.

The most detailed trail hiking maps are published by the Appalachian Mountain Club. I recommend you purchase the AMC White Mountain Map Set (2017 ed) which includes 6 waterproof maps. The AMC also publishes The White Mountain Guide, now in its 30th edition, which has excellent trailhead directions and detailed trail descriptions for all 600+ of the hiking trails that are considered part of the White Mountains region, including those outside of the National Forest. It’s the hikers’ bible in the Whites and we all refer to it constantly because it contains kernels of information not visible on maps.

Many of the regional trail clubs, listed above, also publish their own regional maps, which can provide more detail, including historical detail, than the AMC maps. The best place to buy them is The Mountain Wanderer in Lincoln, NH, which also has an online store. If you’re ever in the area, it’s worthwhile stopping by the shop and talking to the owner Steve Smith, who’s the editor of The White Mountain Guide.

I also recommend purchasing a GPS Phone App such as Far Out's White Mountain National Forest Guide, which lists most of the trails, trailheads, shelters, campsites, views, and water sources in the White Mountains National Forest. GaiaGPS is another GPS Phone App, which is stronger in terms of topographic map coverage for the White Mountains but does not have as much information about trailheads, shelters, campsites, views, and water sources. I use both frequently.

There are hundreds of mountains in the Whites, but the most famous are certainly the 4000 footers, referred to as the White Mountain 4000 footers or the AMC 4000 footers. Contrary to its name, the 4000 footer list contains peaks that are over 5000 and 6000 feet high. The 4000 footers and the trails leading to them are quite popular, especially in summer and on weekends. Mt Washington is by far the most popular because it’s the tallest and you can drive to the top.

There are other 4000 footers in the White Mountains that are not on that list, but this is the list that most peakbaggers get hooked on first. The 4000 footer committee awards a patch for hikers who complete the AMC 4000 footer list. Over 10,000 people have received it.

Some other regional trail & peakbagging lists include:

You don’t need a permit to hike in the White Mountain National Forest as a private individual. There are some regulations that you do need to be aware of:

These vary across different areas in the National Forest, but some universal restrictions include:

There are numerous backcountry campsites and shelters distributed throughout the White Mountain National Forest. Most are free to use although some charge a small fee in summer to pay caretakers. There are additional USFS campsites, that are NOT marked on maps, so they can be moved around to reduce overuse impacts. They’re marked with a carved wooden sign representing a tent, positioned at ankle height, and easy to miss.

The AMC also has a series of full-service huts where you can stay, although it’s quite expensive (for reservations). Many people think you need to stay in the AMC huts when visiting the White Mountains but that’s simply not true. It’s just one of many options. The Randolph Mountain Club also has a hut system in the Presidential Range, but it is considerably more primitive, less crowded, and less expensive.

You can also camp in the backcountry in a natural setting provided you adhere to the backcountry camping rules, which do require a map to interpret. Please practice Leave No Trace Wilderness Ethics when doing so.

One of the things that makes hiking and backpacking in the White Mountains challenging is the weather.  This is particularly true above-treeline, where high wind, wind chill, and lightning are very real dangers depending on temperatures and the time of year.

Flooding and high water crossings are also an area for concern after major rain events and in the spring, although there are very few water crossings on trails that are actually of much concern provided you have some water crossing experience.

When planning hikes, it’s best to check the weather forecast and trail conditions continuously for a few days before your hike, and have a plan B in case it’s prudent to postpone your original hike.

When planning above-treeline hikes, it is good to plan out a few escape routes below treeline, depending on the weather and time of year you hike. Below treeline hikes are generally safe in most weather, except in certain avalanche zones, and from flying debris or widow-makers.

The State of New Hampshire has started charging people for rescues in some cases. You can buy a Hike Safe Card for $25 per person or $35 per family, which is a form of insurance covering rescue costs.  People who obtain the cards are not liable to repay rescue costs if they need to be rescued due to negligence on their part, regardless of whether they are hiking, boating, cross-country skiing, hunting, or engaging in any other outdoor activity. An individual may still be liable for response expenses, however, if such person is deemed to have recklessly or to have intentionally created a situation requiring an emergency response. People who possess a current New Hampshire Fish and Game hunting or fishing license, or a current registration for an off-highway recreational vehicle, snowmobile or boat, are also exempt from repaying rescue costs due to negligence.

If you require a rescue in the White Mountains and have a cell phone, dial 911. If you are physically in NH and on a landline, call 1-800-525-5555. Both of these numbers call the NH State Police. They will answer 24 hours a day and will initiate the rescue. Be sure to give specific details concerning you, your emergency, your location, and a call-back number. Don’t call the NH Fish & Game Dispatcher. They have very limited hours and you may not reach anyone. They request that you call the State Police numbers instead.

Note: Cell phone service can be very spotty in the White Mountains although it has improved in the past few years. Your best alternative is often a satellite messenger like a Garmin Inreach, self-reliance, and proper preparation.

There are black bears. Many of the AMC and some USFS managed campsites have bear boxes, but you should be prepared to hang your food with a bear bag or by using an Ursack bear-proof bear bag when camping at less developed or backcountry sites.

The USFS is quite vigilant about patrolling for bear bags at campsites, particularly in The Great Gulf below Mt Washington, and will cite people who don’t hang their food. The USFS also loans out bear canisters at the Lincoln Woods Trailhead, although they’re not mandatory yet in the National Forest.

Water is generally abundant in the White Mountains, although you may need to drop down side trails when hiking above-treeline to resupply. Carry a map, so you can locate natural water sources. Filtering or water purification of backpacking is highly recommended.

New Hampshire’s White Mountain National Forest is a fantastic place to backpack. This quick and dirty guide provides all the information you need to get started in planning your next adventure including camping, shelter, and trail system information, recommended maps, permits and regulations, travel, weather, and more.

If you’re interested in backpacking in the area, be sure to check out my free guidebook, Backpacking the White Mountain 4000 Footers, which has numerous backpacking trip plans to the high peaks and other scenic destinations.

SectionHiker is reader-supported. We independently research, test, and rate the best products. We only make money if you purchase a product through our affiliate links. Help us continue to test and write unsponsored and independent gear reviews, beginner FAQs, and free hiking guides.
Previous Cutter Lyme Disease Tick Test Kit Review
Next How to Choose an Ultralight Tent or Shelter