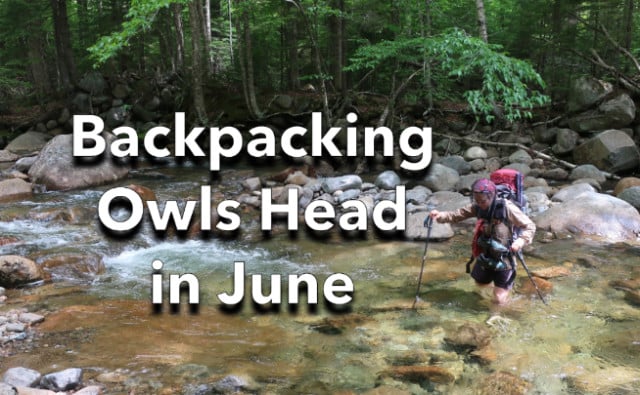 “The Lincoln Brook Trail is beautiful in the morning sun”, I thought as we hiked back after camping near the base of Owls Head Mountain, deep in the Pemigewasset Wilderness.  My friends Ken and Karen and I had backpacked in the day before to climb the peak and then fly fish the brook which has miles of boulders, pools, and ledge drops that are perfect brook trout habitat.

We’d come in the long way on the Franconia Brook Trail which requires several wet stream crossings over Franconia Brook and Lincoln Brook as well as some rock hops over their minor tributaries. While you can climb Owls Head as an out and back in a long day, and I have several times already this year, Ken and Karen had expressed an interest in doing some fishing and backpacking this summer and I was happy for the company. Even more so because I haven’t seen much of them in recent months, after hiking many 4000-footers together over the winter months, including Owlie, as Ken likes to call it.

I’ve had my eye on Lincoln Brook and Franconia Brook since last year and was just waiting for spring to get back out to them with some rods, flies, and free time. While I did get to do some fishing, most of my river time on this trip was spent instructing Ken and Karen on the nuances of fly fishing in shallow mountain streams. It’s actually pretty simple (tip up, no drag on the fly) and they caught on quite quickly. Not that I doubted them, since they’re both science teachers and lifelong learners.

Karen grew up in a fly-fishing household, so she was set as far as gear goes. But Ken wanted to try his hand at Tenkara and had a rod that he’d never used. So I pulled together some lines, flies, and tools for him to use on the river and helped him outfit his rod so he’d have an easier time getting started than I had. I’m entirely self-taught, which was an uphill battle for many years, although I’ve managed to become a quite proficient fly-fisherman.

We did climb the peak, going up the Owls Head Path, which is an avalanche slide, and climbs 1400′ of elevation in 1.1 miles, so it’s pretty darn steep. In the winter months, the slide isn’t safe enough to climb so we bushwhack the summit using a well-known herd path. But in warm weather, the slide offers the only decent view of Franconia Ridge, which towers over Owls Head to the west.

Fording the streams out to Owls Head was quite straightforward and the water levels were perfectly safe. The water was really cold though, but that’s why trout like it. The bugs however were awful. We haven’t had much of a black fly season this year in the Whites, but the mosquitos have been really bad.

Anticipating the bugs and the bushwhacking required to fish mountain streams, I wore long pants and a long sleeve fishing shirt on this trip, along with well-draining trail runners, so I could walk in the streams and move quickly from pool to pool. My companions were not so lucky and wore shorts with lots of bug dope, although they had thermal sleep clothes, and rain gear if needed. We did end up wearing head nets for most of the trip, though.

I caught my share of wild brookies on this trip and they were abundant, though small. The best fishing was upstream near the Owls Head Path, where the brook narrows and the water flow is less powerful. But several return visits are required to fish the miles of stream that I was not able to visit on this trip, both upstream of Owls Head and the downstream portions that require more bushwhacking to access.

Camping with Ken and Karen was fun. There are a million pre-existing campsites all around Owls Head and we were able to find good tent sites in the surrounding forest. Since we were out there on a weekday, we had the forest to ourselves, although I can imagine getting quite busy once school gets out for the summer.

After we’d finished fishing, we started making dinner and it started to rain. It was supposed to be blue sky, but this month’s weather forecasts have been all over the place and often wrong. While Ken and Karen retreated to their tent, I put on my rain gear and continued cooking. It wasn’t raining hard and I was ready for some hot food. The rain stopped soon and we regrouped before retiring at hiker midnight to chill and get a night of restorative sleep.

This was a nice trip to bag a Grid peak (#435/576) and do some fishing along the way. I’m looking forward to more trips like this to the peaks and streams in the White Mountain National Forest this summer, combining two of my favorite activities while hanging out with friends.

The out and back distance from the Lincoln Woods Trailhead is 19 miles with 3000′ of elevation gain.

SectionHiker is read supported. We independently research, test, and rate the best products. We only make money if you purchase a product through our affiliate links. Help us continue to test and write unsponsored and independent gear reviews, beginner FAQs, and free hiking guides.
Previous Sleeping Outdoors is a Skill
Next Zpacks Packing Cubes Review