Backpacking to the Center of the Pemigewasset Wilderness

Mount Guyot is a 4000 footer (4580′) located near the center of the Pemigewasset Wilderness, almost exactly halfway between Franconia Notch and Crawford Notch, as the crow flies. Pronounced “Gee-oh”, with a hard “G”, it’s named after the Arnold Guyot, a geography and geology Professor at Princeton University who is credited with making the first accurate map of the White Mountains. The summit of Mount Guyot consists of two bald domes of nearly equal height, but the south dome is considered the summit and has a large summit cairn built on top.

Guyot is a major crossroads in the Pemi (see Backpacking a Pemi Loop) linking the North-to-South Bondcliff Trail to the East-to-West Twinway Trail (which coincides with the Appalachian Trail.) It has great views of Franconia Ridge, Owlshead Mountain in the center of the Pemi, Mt Garfield, South Twin and the avalanche scars on the Pemi’s north rim. The only peak you can’t really see well is Bondcliff, which is blocked by the massive Mt Bond.

You can’t camp on Mt Guyot because the summits are above tree-line, where camping is prohibited. They are covered with fragile alpine vegetation which has a very short growing season because it is covered with snow and ice for 8 months or more each year. Hikers are asked to stay on the scree-bordered paths to avoid disturbing these delicate plants, which die when trampled by hikers.

Guyot wasn’t my only destination on this trip. I planned to climb up Mt Zealand and Mt Hale (2 x four thousand footers on the AMC four thousand footer list) and then climbed down the very steep Zeacliff Trail to Whitewall Brook. The truth is, I wasn’t really interested in climbing the mountains per se, but in hiking the trails to and from them. I like to backpack as much as I can so I can do longer trips and because I like to camp outdoors in remote locations.

Here’s a map of the route. This is a georeferenced PDF created using Caltopo. You can navigate with it using an app like Avenza (directions here) or just print it out. Center of Pemi Map

I planned a loop hike so I could get back to my car without having to hike the same route twice. I had to re-hike a few miles, but they always go much faster the second time around.

The Zealand Trail is an easy trail to follow and is quite well maintained because it leads to an AMC Hut and is well-traveled. It’s a key route into this part of the Whites and I’ve lost track of how many times I’ve hiked it. It’s always a little different each time because it’s being constantly washed out, flooded by beavers, or rerouted to limit overuse impacts. The lower part of the trail has good access to the Zealand River and there are a number of swimming holes beside it. There’s also some attractive small stream fishing there, although I’ve never once caught a trout in this section.

The Zealand Trail turns right at the Ethan Pond trail junction and passes Zealand Falls before arriving at Zealand Hut. There are drinks and fresh-baked snacks (paid) at the hut, along with water and bathrooms (free). I paid for some lemonade and cut it with water because it was way too sweet for my taste. I also topped off my water bottles (3L) because I knew that water would be very limited for the rest of the day.

The Twinway begins at Zealand Hut and climbs steeply to Zealand Ridge. It’s named after the Twins, South Twin and North Twin, two 4000 footers to the west. The last time I climbed this trail was on a winter Bonds Traverse a few years ago on the day I finished my Winter 48, on Bondcliff, and the TrailWrights 72 (peaks only) on Mt Guyot, both on the same day. It was much easier to climb than I remembered from my previous hikes up it. I think the trail maintainers have filled in all of the gaps between the rocks with mineral soil and many new stairs were evident.

When I got to the top I stopped at the viewpoint overlooking Whitewall Mountain and took in the view, while letting my sweat-soaked hiking shirt dry. It was a clear day and I had outstanding views of Mt Washington, the Carrigan cluster, and the Hancocks.

The Twinway is a fairly tough trail between Zealand Hut and Mt Guyot with lots of little ups and downs and big rocks embedded in the path that you need to clamber over or skirt around. It was a Monday, so there was no one of the trail except the AT thru-hikers who start to reach the Whites in greater numbers in early July.

I popped down to Zealand Pond, which is a short spur trail off the ridge. It was looking low but fairly pristine considering the hordes that pass it along the Twinway.

A little further along, I ducked down the Zealand Mountain spur trail to hike to the summit sign and back, before continuing to Guyot. There’s quite a noticeable col between Zealand and Guyot, but you’re soon rewarded when you pop out of the krumholz above-treeline on Guyot’s northern summit.

I turned left (south) when I reached the Bondcliff Trail and climbed the short 0.3 mile up to the cairn on the south dome. It was one of those perfect days with clear skies and 100 mile views.

Having achieved my goal, I retraced my steps back along the Twinway to the Zeacliff Trail junction. This trail drops 1500′ in 1.4 miles, which is actually pretty average in terms of steepness in the Whites. There are a few spots, however, where you have to down-climb small cliffs, something I like to do by facing the wall and climbing down backward like you would descend a ladder, feeling for toe holds with my feet for purchase.

There two kinds of trails in the Whites: trails that are best hiked up, and those that are best hiked down. I’d classify Zeacliff as a down-trail because it’d be a real killer to try to climb it. A good example of an up-only-trail is the Huntington Ravine Trail which you only want to climb up, since going down can be real dangerous, especially when the slabs are damp or wet. The White Mountain Guide is the definitive reference for figuring out the best direction (up or down ) to hike most trails. If you don’t read it before a trip, you’re shooting yourself in the foot.

Hiking down the Zeacliff Trail was no cakewalk, what with the cliffs and trail erosion I saw from past rain events. At one point I slipped on a ledge and started to slide down a steep section of the trail, only to be stopped by two birch trees in my path. If they hadn’t been there to arrest my fall, I’d probably been seriously injured. It was the kind of slide you’d use an ice ax to self-arrest in winter, although I could have used an ice ax then, as well!

The Whitewall Brook runs down the Zealand Valley at the base of the Zeacliff Trail. By this time I was tired and thirsty, so I found a pleasant pre-existing campsite and made camp for the night. Once I’d set up my tent and gotten situated, I cooked up a hearty dinner and chowed down with a Knorr’s Rice Side and a dehydrated Tuna Salad from Packit Gourmet. It was good, but overpriced when you think about it, like all prepackaged backpacking meals. After dinner, I washed up and retreated to my tent to escape the mosquitos. The insect pressure was really intense that night, so I remained in my tent until morning.

I ate an early breakfast the next day and hiked up the Ethan Pond Trail before looping past the Zealand Hut once again. I didn’t stop this time, but kept on going, climbing the Lend-a-Hand Trail to Mt Hale. I had no idea what to expect since the last time I’d hiked this trail was 10 years ago in mid-March when it was covered with several feet of snow.

To my surprise, I found the Lend-a-Hand to be a gorgeous trail and by far the nicest of the three trails that climb Hale, including the Fire Wardens Trail and the Hale Brook Trail. The gradient is fairly mellow, climbing 1400′ over a distance of 2.7 miles, passing over boardwalks, through forest, and open scrub. Bears obviously make their home here because I saw a large pile of fresh scat, still steaming, right on the trail.

I summited Hale and examined the old fire tower pilings for a while, before descending down the Hale Brook Road to Zealand Road. I’d walked about half-way back to my car, when I hitched a ride on the AMC shuttle bus back to the Zealand Trailhead lot. They were kind to pick me up on the hot and dusty road, a fitting and friendly way to end a pleasant trip. I was sure to pass along the kindness that week, giving rides to hitching hikers I saw along the road. 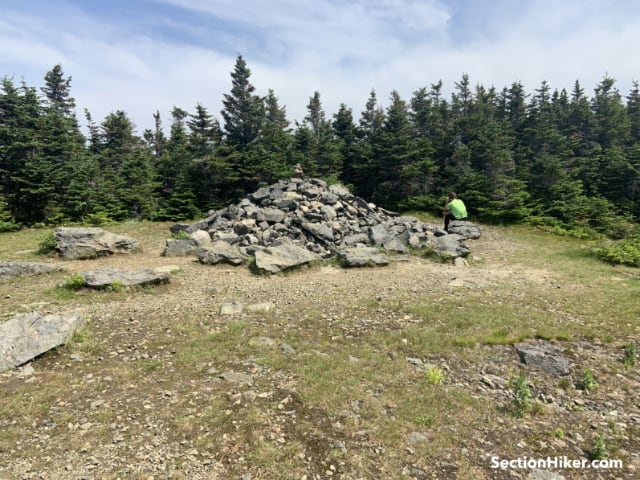 Editor's note: If you’re thinking about buying gear that we’ve reviewed or recommend on SectionHiker, you can help support us in the process. Just click on any of the seller links above, and if you make a purchase, we may (but not always) receive a small percentage of the transaction. The cost of the product is the same to you but this helps us continue to test and write unsponsored and independent gear reviews, beginner FAQs, and free hiking guides. Thanks and we appreciate your support!
Previous Thule Versant 50 Backpack Review
Next Outdoor Research Panorama Point Rain Jacket Review