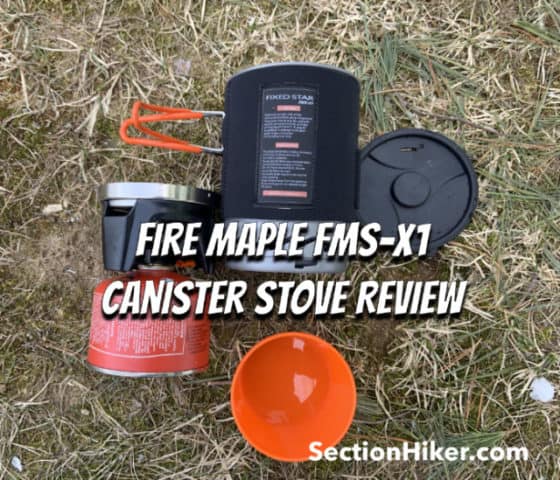 The Fire Maple Fixed Star FMS-X1 Canister Stove System is a complete camping stove cooking system that includes an insulated anodized aluminum cook pot, plastic cup, and canister stove, with a fuel control knob and piezo igniter. The cookpot is 1.5L in size and comes with a neoprene sleeve, snap-on lid, fold-out handles, and heat exchange fins. The stove is compatible with all popular screw-on isobutane fuel canisters. But size isn’t everything, as they say. The stove is underpowered for boiling 1 liter of water at a time, and best used for boiling 2 cups at a time. The lack of a canister stand should also be noted and is something you’ll probably want to purchase separately to avoid tip-overs when using this unit.

The Fire Maple FMS-X1 is a low-cost canister stove system that includes a stove and insulated cookpot like a Jetboil Stove. While the pot has a high 1.5 capacity, the included stove in underpowered and for a pot this size.

The FMS-X1 is similar to a Jetboil personal cooking system in form and function, although it’s missing the optional fuel canister stand that helps make a Jetboil more stable and less tippy in use. Otherwise, there are minor differences between the two cook systems, although the Fire Maple is one-half to one-third of the price of a Jetboil because it is sold directly to consumers. Fire Maple and Jetboil stoves are both made in China.

The FMS-X1 cook pot weighs 8.0 ounces including its cap, and has a total capacity of 1.5L of water, although you’ll want to limit filling it to 1.0L to prevent boil overs. It’s made from anodized aluminum and has built on windshield and heat retention fins on the bottom which reduce fuel consumption by 30%. The pot is also insulated with a neoprene jacket and has two insulated fold-out handles (and not a cheap nylon strap like Jetboil) that provide a sturdy way to pick up the pot when it full of food or liquid. The interior of the pot has graduated liquid measurement marks in quarter liters, up to 1.0L.

The plastic lid locks on top of the pot and has a sip hole, so you can use the pot like an insulated drinking mug. There aren’t any colander holes in the top to drain liquid or vent steam, but they’d be easy enough to make yourself with a child’s hole punch.

While the pot is wide enough to hold a large 230-gram isobutane canister, you can’t fit the canister and the stove element in the cookpot at the same time. You can fit a small 100-gram canister inside though without any issues. To help reduce rattling, you can leave the canister attached to the stove and stack them inside the pot with the cap closed. This also helps conserve the tiny amount of fuel that escapes whenever you screw-on or unscrew the fuel canister from the stove.

The Fire Maple FMS-X1 burner head bears an uncanny resemblance to that of a Jetboil stove (you have to wonder if they’re made in the same Chinese factory), with a dense configuration of circular jet holes. A push-button piezo igniter is included with the unit, which has a twist knob fuel control valve, instead of the cheap wire bales found on many other canister stoves that fall off and are easy to lose. All of these burner components are anchored to a black plastic mount to protect them and keep them properly aligned.

The FMS-X1 has a 5,115 BTU power rating, but I’ve concluded that it’s underpowered for its large pot size. While the 3:25 boil time for 2 cups of water is acceptable, the boil time for 1 liter is 10:20 minutes, even with a fairly full gas canister, since the stove is unregulated. If you’re considering the FMS-X1 for group or couples use, think again. It’s just too slow. I’d recommend the 1.8L Jetboil Sumo instead, which can boil 1 liter in 4:15. See Jetboil Buyers Guide for boil times.

The FMS-X1 comes with a plastic bowl and a mesh sack for holding the unit closed in transport. The plastic bowl is a nice-to-gave, but something you can discard if you plan to eat and drink out of the pot like most people. The unit includes a mesh carrying sack which can also be discarded but is useful for keeping the lid secured to the pot if you dent it on your travels. It happens.

The Fire Maple Fixed Star FMS-X1 is a well made, affordable canister cook system comparable to a Jetboil, but available at a fraction of the price. It includes everything you need to boil water for freeze-dried camping meals or soupy meals, including a large 1.5L cook pot with fuel-saving heat exchange fins and a built-in wind guard,  sturdy folding handles, and a neoprene insulation sleeve. A built-in piezo igniter, fuel valve, sip lid, and plastic bowl further add to the completeness and ease-of-use for one or two people. However, the included stove included is underpowered to take full advantage of the unit’s large capacity 1.5L stove pot. If you only plan on boiling 2 cups of water, then the FMS-X1 will work fine, but if you intend to use it for group or couples use, I’d recommend getting a unit with a more powerful stove and faster boil times.

Fire Maple is a reputable backpacking and stove company that manufactures its products in China (like Jetboil) and is a trustworthy brand to purchase products from. They also sell directly to consumers on Amazon.com.

Disclosure: The author purchased this product.

Editor's note: If you’re thinking about buying gear that we’ve reviewed or recommend on SectionHiker, you can help support us in the process. Just click on any of the seller links above, and if you make a purchase, we may (but not always) receive a small percentage of the transaction. The cost of the product is the same to you but this helps us continue to test and write unsponsored and independent gear reviews, beginner FAQs, and free hiking guides. Thanks and we appreciate your support!
Previous REI Minimalist GTX Mittens Review
Next Columbia Outdry Ex Blitz Rain Jacket Review