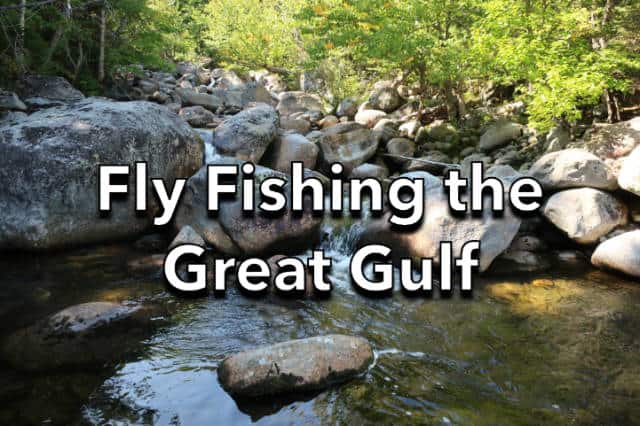 The Great Gulf Wilderness is a deep glacial valley surrounded by Mt Washington, and the Northern Presidentials – Mt Adams, Mt Jefferson, and Mt Madison. It’s drained by a high gradient stream called the West Branch of the Peabody River which runs for about 5 miles before it flows into the main branch of the Peabody.

The cold water and boulder-choked West Branch provides a perfect habitat for native brook trout that are a delight to fish with a Tenkara Rod. This being New England, the trout are small but feisty, for those willing to brave the terrain in the Gulf which is a mixture of trees, roots, mud, and rocks that have tumbled down the mountain slopes to rest on the valley floor.

I’ve been fishing the West Branch for two years now and I always experience a sense of awe of the landscape. There’s very little fishing pressure because you have to hike for a few miles to get up to the best terrain. Most fishermen, even fly fishermen, aren’t willing to work that hard to get to a mountain stream that only has small trout. The season is also quite short, really from mid-June when the snow melts out, to mid-October when the New Hampshire fishing season ends and winter threatens once again.

My favorite time to head upriver is in August and September when the trout are more active and take dry flies that float on top of the water. You still have to be able to read trout water to understand where the fish lie to feed in a mountain stream, which is itself a challenging mental exercise. There’s also a frequent need to bushwhack through the dense vegetation along the banks and to scramble in the boulder gardens that choke the river bed to reach the best pour-overs and pool drops. It’s a workout.

As you make your way up the Gulf, the river gets narrower, the boulders get bigger, and the tree canopy denser. I’m not a Tenkara snob, but this is not the type of terrain why you can cast a conventional fly rod without getting your flies caught in the trees. The water is not deep, maybe three deep at most, and short tippets are the rule. I usually fish about 13-15 feet of line total with a 12 foot rod, which lets me cast to the far bank with great precision.

I don’t carry a thermometer when I fish the Gulf, although I’ve been meaning to get one. But the water is cold, damn cold, because it’s largely spring-fed and still runs in dry years. Getting your feet wet is usually unavoidable to get to the best spots, so well-draining shoes are the name of the game. I don’t think I’d ever head upriver in waders or fishing boots however because they’re just too heavy and clumsy for clambering along the rocky river bank.

The water in the Great Gulf has been quite low this year since we’re in the midst of a terrible drought, but there were still trout when I was up there last. There are lots of other places like it in the White Mountain National Forest with steep watersheds that are easy to find if you’re willing to pour over topographic maps and explore the terrain on foot. That’s the beauty of living and playing in these mountains since you’re free to roam on the public lands within the forest’s borders.

But the greatest reward of fishing in the Great Gulf is the serenity if feel when I immerse myself in such a transformative and awe-inspiring place. I’m not in there just to fish, although it’s a great excuse to lose my cares for the day.

Philip Werner has hiked and backpacked over 8500 miles in the United States and the UK and written over 2500 articles as the founder of SectionHiker.com, noted for its backpacking gear reviews and hiking FAQs. A devotee of New Hampshire and Maine hiking and backpacking, Philip is the author of Backpacking the White Mountain 4000 Footers, a free online guidebook of the best backpacking trips in the White Mountains in New Hampshire and Maine. He lives in New Hampshire. Click here to subscribe to the SectionHiker newsletter.
Previous 53 Bushwhacking Tips for Off-Trail Navigation
Next SOL Escape Pro Bivvy Review