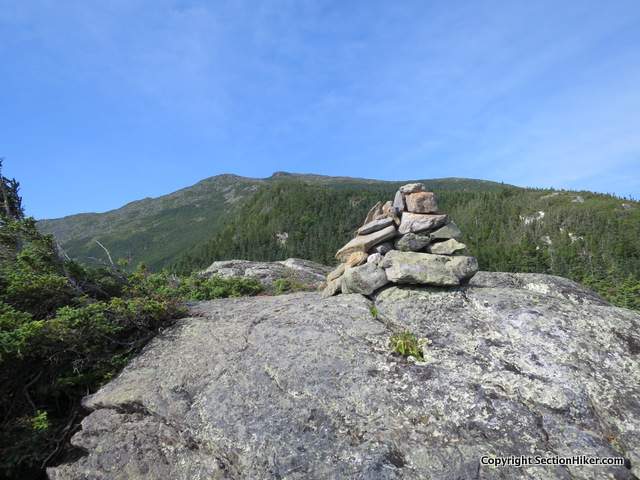 When I want inspiration, I head above treeline in New Hampshire’s White Mountains. There’s something about the big views and the physical exertion of climbing a mountain that lifts my spirits and lets them soar.

For this trip, I hiked up to the top of Mt Madison (5367′) before dropping down a few hundred feet and walking around its perimeter, following two talus-choked trails that loop around the summit cone. The fourth highest peak in the Whites, Madison is in the Northern Presidentials, by far the toughest mountain range to climb in the White Mountains.

I hiked up Madison on the Pine Link Trail, which climbs 3,450 feet in 3.5 miles to the Watson Path, which climbs the final 400 feet to the summit in 0.3 miles. The above-treeline segment of the trip, which starts at about 4500′ in the Northern Presidentials and indicated by the warning sign above, requires hiking across boulder fields baked by the sun. One false step and you can break a trekking pole or worse.

The climb up the Pine Link Trail was strenuous, but no more so than the other trails that climb to treeline in the Northern Presidentials. The Pine Link Trail approaches Madison from the east from a trailhead off a dirt road called Pinkham B Road. This dirt and gravel forest service road provides a shortcut from the Dolly Copp Campground off Rt 16 to the Randolph East trailhead off Rt 2. Pinkham B Road also provides access to Pine Mountain Road and the Ledge Trail, leading to the Horton Center on Pine Mountain. Pinkham B is a pretty rough road, so take your time driving on it.

I arrived at the Pine Link Trailhead at 7:00 AM because I knew we were in for a very hot and humid day, with temperatures expected in the high nineties in the valley. Winds at the summit were forecast to be 25-30 mph with stratus clouds, so acceptable conditions for an above-treeline hike. I’m very cautious to avoid above-treeline hikes on days when thunderstorms are expected: too many close calls. People who are struck by lightning are never quite the same afterward.

After 2.4 miles, the Pink Link Trail coincides with the Howker Ridge Trail for 0.3 miles, before the two spilt again. The Howker Ridge Trail is another great trail to climb Mt Madison: it follows a ridge of subsidiary peaklets called Howks, which provide great views of Madison and Carter Notch on the other side of Rt 16.

At 2.7 miles, the trails spit again with the Pine Link heading around the north side of Madison. The trail passes over bog bridges at about 4600′ before climbing up a wet moss-covered trail. I suspect this section is usually underwater, when not in a drought, as it is now.

I soon popped out above treeline and followed the white-topped cairns to the Watson Path, which leads to the summit. It is very hard to follow since it runs over talus boulders to the summit. I had to carefully locate the cairns and follow them to the top of Madison.

Once at the top, I rested at the summit, sheltering behind a large cairn to get out of the wind. I ate some smashed up potato chips to replenish the salt I’d lost sweating, ate a pack of cookies, and gulped down more water. I then dropped down the Osgood Trail to Osgood Junction, in order to get on the Parapet Trail, another talus covered trail that loops around the south side of Madison’s cone. The Osgood Trail is part of the New Hampshire Appalachian trail and I met a SOBO thru-hiker named Otter on the way down.

By now I was running out of water, so I was eager to get to the Madison Hut and resupply. But the going on the Parapet Trail was pretty rough and I was forced to gingerly pick my way through a maze of boulders, all the while glancing down into the maw of Madison Gulf. The trail entered Krumholz (dwarf-sized trees) and began to moderate, still, concentration was required to maintain a constant pace. I sipped my last water as I passed the trailhead to the Madison Gulf Trail, which drops 2.6 miles down the front of Madison to the bottom the Great Gulf, the giant glacial valley below Madison, Adams, Jefferson, and Washington.

I passed the Parapet, the rocky prow that overlooks Madison Gulf, situated just south of Star Lake, a small Alpine Tarn between Mt Adams and Mount Madison. The Madison Hut (and water) were just 0.2 miles away. I wondered if the kitchen would be selling snacks to passing hikers, a welcome custom that I like to indulge in when I visit the hut.

Indeed they were. There were free leftover eggs and oatmeal, along with cinnamon cookies and walnut brownies. But I spied a plate of leftover cinnamon buns and chose the largest one for a snack, dropping two bucks into the kitty in thanks. I quaffed a few cups of cold lemonade, also for sale, and refilled my water bottles, eager to get below treeline again.

You see, I’d also checked the forecast, which is prominently displayed in all the AMC huts, and saw that there was a chance of afternoon thunderstorms. It was still early in the day, just about noon, but the stratus clouds I’d seen in the morning were giving way to towering anvil clouds, a warning of things to come.

I finished my snack and departed, hiking around the north side of Madison and back down the Pine Link Trail the way I’d come that morning. It still took me three hours to descend and  I was grateful to get down without any sign of thunder.

Despite the heat and humidity, I’d still had a glorious time above-treeline and felt my mood soar. From there, I headed to my campsite for a handheld shower and a cold brew before dinner and bed.

SectionHiker is reader-supported. We independently research, test, and rate the best products. We only make money if you purchase a product through our affiliate links. Help us continue to test and write unsponsored and independent gear reviews, beginner FAQs, and free hiking guides.
Previous Sawyer Pond Backpacking Trip Plan
Next GPSFileDepot – Free Garmin GPS Maps