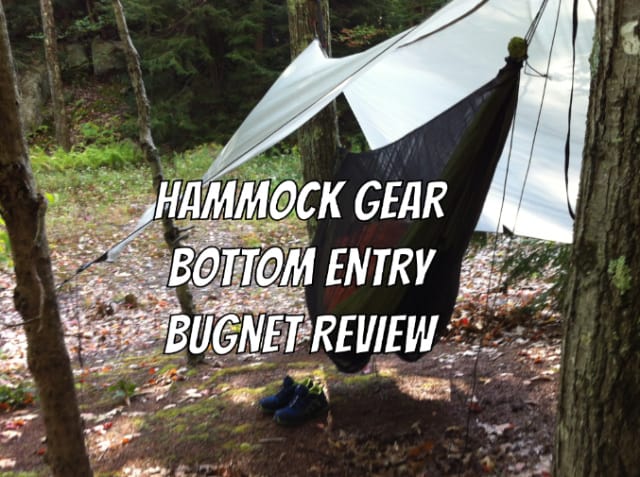 The Hammock Gear Bottom Entry Bug Net is a simple, inexpensive, durable and lightweight solution to protect yourself from bugs while hammock camping. It eliminates zippers which can snag or fail, and, per its name, uses elasticized shockcord on the bottom for the entry point. The Bottom Entry Bug Net is made for gathered-end hammocks and must be used with a ridgeline (not included) to keep it suspended away from your body.

The Hammock Gear Bottom Entry Bug Net was designed without zippers, which can snag mesh, get stuck or break. The main feature of the Bug Net is a big opening that goes underneath the hammock and is tightened with shockcord.

This design was originally popularized by a DIY hammocker named Fronkey and is often called a Fronkey-style bug net. Since I started hammocking several years ago, I’ve been using a homemade bug net made from voile curtains based on his instructions. My bug net had two small openings at the top for the suspension to come through that were tied off with cord to prevent bugs from entering. I sometimes found, however, that moving a lot in the hammock caused the cords to work their way off the ends of the netting, leaving a hole for bugs to enter.

Hammock Gear takes the same concept but has solved this problem in two ways. First, they use shockcord and cordlocks to close off each of the ends. Shockcord is elastic and thus is more forgiving than static cord to the dynamic movement inherent to hammocking. Secondly, they put mitten hooks on either end which clip to the hammock’s suspension. The mitten hooks can slide a few centimeters along the suspension but prevent the bugnet from being pulled further and the cordlocks opening up under tension. It is a simple and smart solution.

Lightweight mesh is commonly the most fragile area of a backpacking shelter, prone to snags, runs, and tears. Hammock Gear’s Bottom Entry Bug Net came packed in a stuff sack made of the same mesh netting, and I found a 3/8” wide by 20” long extra strip of this fabric in there as well. It’s too small to be used as a repair patch, so I imagine it was just a scrap piece of the trimming that got stuck to the fabric.

However it got there, it gave me a nice little piece of the fabric to run some durability tests on. I was surprised that I could pull hard on both ends of the mesh without permanently deforming it or ripping it. It took substantial effort, wrapping the mesh around several fingers of each hand for a strong grip, to finally rip this narrow strip of mesh–much more force than I would have expected. I’m impressed.

Bug Net Inside or Outside the Underquilt

You can rig the net with your underquilt outside or inside. I’ve tried it both ways. Personally, I like to keep a bugnet on the hammock if I know I’m camping in a buggy area. One night this past summer, I added my MYOG bugnet in the field during heavy bug pressure, and I caught several mosquitos inside it, who proceeded to buzz around my head all night, robbing my sleep. (A little Picaridin lotion on my face meant they never bit me, just taunted me with their whining).

If you do this, it’s easier to rig the underquilt on top of the bugnet. This also means you don’t need to cinch it up as much since the bottom opening is covered by the underquilt. Exit and re-entry is easy this way, but if you need to readjust your underquilt in the night you have to feel through the net to do it. Not a big deal.

The more common way is to rig the bugnet on top of your hammock and underquilt insulation. This makes it easier to adjust your underquilt in the night. Initially, you may notice the bug net hanging below the underquilt, but once you get into the hammock it seals nicely along the bottom. It is a little more fiddly to set up in the field if you left the bugnet on your hammock because you have to thread the underquilt suspension through the small shock-corded hole in the bugnet that the hammock goes through.

Hammock Gear’s Bottom Entry Bug Net is a great bug solution for hammockers who already have a hammock without a net or zippers for one, for those who prefer zipperless gear, or for folks who only need a bug net for a small part of the year and don’t have a need for a winter barrier (a wind-blocking cover which helps keep heat in). If you are a four-season hammocker, a hammock with a zip-off net and interchangeable winter barrier may be a more versatile solution for your needs.

Disclosure: Hammock Gear provided SectionHiker with a bug net for this review.

Greg Pehrson is an ultralight backpacker who was bitten hard by the MYOG (make-your-own-gear) bug. He repairs, tinkers, and builds gear, often seeking to upcycle throwaway items or repurpose things from outside the backpacking world.
Previous The TentLab MoonLight ML2 Tent Review
Next Kelty Redwing 50 Backpack Review