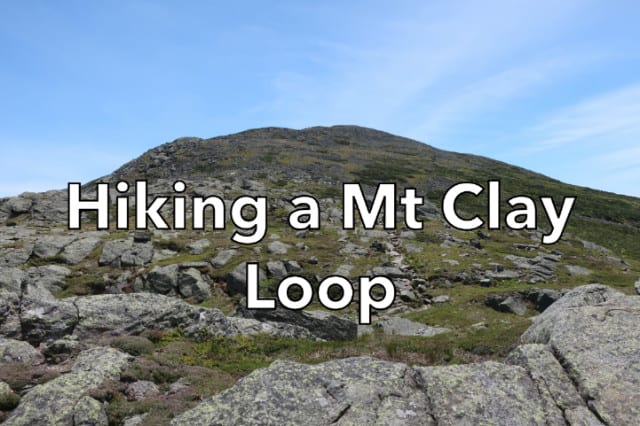 Mt Clay is a 5500′ subpeak of Mt Washington that towers over the west end of the Great Gulf. While it’s become an increasingly popular destination in the Northern Presidentials, you can still find yourself alone on the summit when the surrounding high peaks are busy on weekends.

Clay is literally a stone’s throw from Washington making it convenient to climb the two together on the same day. When I was there a few weeks ago, the weather was stunningly clear and there were dozens of backpackers and day hikers hiking Presidential Traverses that day since June is the best time of the year (fewest thunderstorms, long days) to attempt one. In fact, I ran into my friends Wanda (queen of the gear hacks) and Larry on Mt Clay, who had started that morning at 4:00 AM to hike one.

I’d started my own hike at 7:00 AM to hike during the coolest part of the day. While the air temperatures above treeline were in the 40’s, the rocky trails absorb a lot of sunlight during the day making it feel much warmer on clear days. I carried extra water with me (4L) so I could stay properly hydrated without having to detour to a hut or a spring to get more.

I followed the Gulfside Trail south toward Mt Washington and hooked up with a party of backpackers from central Massachusetts who were doing a 2-night Presidential Traverse. They’d climbed Madison and Adams the day before and camped at the Perch, a campsite run by the Randolph Mountain Club in Mt Adams.

I asked them about the weather on the previous day and they said that the wind was so strong that it had knocked them down while climbing Mt Adams. If you’ve ever seen the boulder pile called Mt Adams (or Madison, Jefferson, and Washington), you know that’s not a good idea. If you fall, it’s all too easy to break a wrist, break an ankle, or cut your legs and arms to shreds on the sharp rocks.

The winds had been blowing at 45 mph for the prior two days on Adams and all the northern Presidentials with gusts up to 65 mph. The forecast called for -20 wind chills with an above-treeline hypothermia warning issued by the Mt Washington Observatory, and snow forecast over 5500′, in June.

To each his own, but I postponed my hike for 2 days to avoid that weather. I can understand the desire to stick to your trip plan, especially if you’re traveling some distance to the Whites to hike, but I’d encourage you to pad it out with a few extra days so you can avoid hazardous weather.

Winds over 45-50 mph will knock you down in full exposure above treeline, while it’s impossible to walk at all if winds are over 60 mph. If you have an accident, the wind can seriously complicate or delay a rescue. It’s never a bad idea to postpone a hike over the northern Presidentials in poor weather or to hike something more protected below treeline. I’ve had too many close calls above treeline in the Presidentials to push my luck.

After lunch, I hiked down to the Clay Loop which climbs over two bumps: the northern bump is the summit at 5533′. As soon as I rounded the first boulder, the hubbub surrounding Mt Washington faded away and I could gaze down into the Great Gulf Wilderness without distraction. I remain standing there for quite a while cataloging the many places in the gulf that I’ve visited in the past: Spaulding Lake, the Mt Washington Headwall, the Wamsutta Trail, and many others.

The Great Gulf is a glacial cirque or amphitheater-like valley bounded on three sides by Mts Washington, Clay, Jefferson, Adams, and Madison and drained by the West Branch of the Peabody River. Much of it is a designated Wilderness Area which can be quite challenging to hike in, especially ascending or descending the trails that climb between the surrounding mountains and the base of the gulf. I view the Great Gulf as a sort of bio-reactor for the region, a lost world if you would, with a will and personality of its own. I’ve spent a considerable amount of time hiking, fishing, and camping in the Great Gulf and it’s wildness can be a little oppressive if you try to resist it.

There were people gathered around the small cairn on Clay’s high point. I greeted them but hiked past them quickly, unwilling to break by reverie before I shifted my attention to picking my way down the boulder choked path of Clay’s north shoulder. When I reached the col, I looped around the peak and climbed back up to the Jewell/Gulfside junction, descending back to civilization.

Mt Clay is on the Trailwright’s 72 peakbagging list, which includes an additional set of 4000 footers that are not included on the AMC 4000 footer peak list. If you’re looking for a real challenge or a change of pace, I can recommend the Trailwrights. I think it’s still my favorite peak list in the Whites and I’ve very tempted to hike it again.

Philip Werner has hiked and backpacked over 7500 miles in the United States and the UK and written over 2500 articles as the founder of SectionHiker.com, noted for its backpacking gear reviews and hiking FAQs. A devotee of New Hampshire and Maine hiking and backpacking, Philip is the 36th person to hike all 650 of the hiking trails in the White Mountain Guide, a distance of approximately 2500 miles, completing a second round in 2021. Philip is the author of Backpacking the White Mountain 4000 Footers, a free online guidebook of the best backpacking trips in the White Mountains in New Hampshire and Maine. He lives in New Hampshire.
Previous 10 Best Sleeping Bag Stuff Sacks of 2021
Next How Many Days of Food Can You Pack in a Bear Canister?