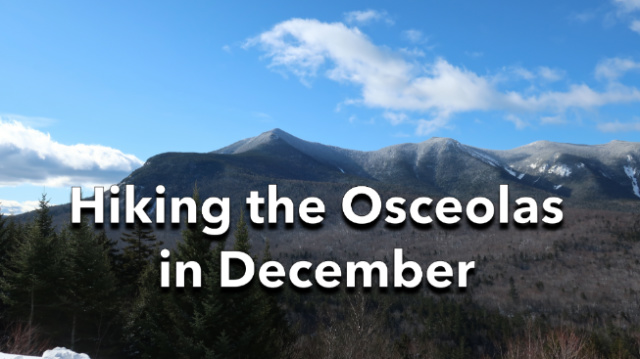 East Osceola (4156′) and Mt Osceola (4340′) are two more 4000 footers where the winter route is significantly more difficult than the summer route. The easier, southern, three-season route starts at Tripoli Rd in Waterville Valley and the ascent is relatively gradual. But Tripoli Rd is gated closed in winter, so you have to climb the peaks from the north side where the ascent is a grueling, steep climb up several very steep pitches that can be quite icy in winter.

I knew all this before I set off on this hike, because I’ve climbed these peaks before in winter, several times in fact, and because I enjoy the process of planning my hikes in order to prepare for them. But I’d never climbed them in December before and needed to summit them for my White Mountains 4000 footer grid.

What I couldn’t foresee was what the trail conditions leading to these two peaks would be like, in part because no one had climbed them recently and written a trip report about it on NewEnglandTrailConditions.com. This is an online bulletin board where hikers share trail information about snow conditions, water crossings, trail hazards, and trail maintenance needs. It’s very useful for deciding what gear to bring on winter hikes, particularly in terms of traction aids.

In hindsight, I would have probably been better off with an even more aggressive pair of crampons, because the trail was covered by 8-12″ of very fine dry snow the consistency of flour. This made it hard to get a good bite into the ice below the snow because the spikes on the Hillsound Pros weren’t quite long enough and floated on top of it. I still managed to claw my way up to East Osceola and then Mt Osceola after that, but a crampon with longer spikes, like my CAMP XLC 490 crampons would have probably made the effort much more efficient.

I got to the Greeley Pond Trailhead at 8:30 am and bare-booted up the Greeley Pond Trail to the Mt Osceola Trail junction. From there I continued to bare-boot to 3000′ relying on my boot treads for traction. I stopped here and put on my crampons for the ascent up to 3800′ where the gradient to the East Osceola summit becomes a bit more manageable. That 800′ climb is only about 0.3 miles in length and it is pretty much straight up. It was slow going, but you just keep on going until it gets easier.

The snow at 3800′ was pretty deep from drifting, but I plowed ahead because it was just another 300 feet to the summit which is marked by a pile of stones, barely big enough to call a cairn. From there I dropped into the col between the peaks where there’s a chimney you can climb or bypass to continue up the trail to the main peak. The chimney was full of ice, so I took the bypass, which wasn’t a cakewalk either, chopping my ice axe pick into the ice in order to pull myself up. From there it was another slog through loose powder up the ridge to the main peak and its outlook.

After a sandwich and a drink, I pulled on my old pair of rain pants, so I could glissade portions of the ridgeline trail back to the chimney and the bypass. I descended the bypass much the same way as I climbed it, chopping my axe into the ice so I had something to hang onto as I backed down the ledges to the bottom of the col. From there, the climb back up to East Osceola summit went surprisingly smoothly, probably because the calories from my lunch peanut butter and honey sandwich were kicking in.

I started glissading down East Osceola but found it difficult to brake very effectively with my ice axe in the slippery snow. The trail is bordered by trees, so an uncontrolled descent could end very badly. So I gingerly sidestepped my way downhill bracing myself with my axe uphill and occasionally glissaded short sections when it was too steep to descend any other way. Once down to 3000 feet, I removed my crampons and rain pants and bare-booted back to the trailhead.

This was a tough hike, but the Osceolas are always tough in winter. Since I also need them for January, I have a feeling I’ll have another crack at them all too soon.

SectionHiker is reader-supported. We independently research, test, and rate the best products. We only make money if you purchase a product through our affiliate links. Help us continue to test and write unsponsored and independent gear reviews, beginner FAQs, and free hiking guides.
Previous Arkel Ultralight Dry-lite Waterproof Panniers Review
Next Seek Outside Peregrine 3500 Backpack Review