Hiking and Fishing the Hancocks 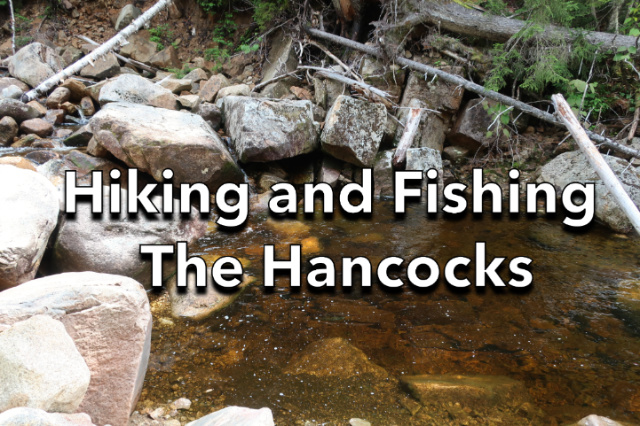 North and South Hancock are two White Mountain 4000 footers in New Hampshire’s Pemigewasset Wilderness that are connected by a short ridge. Climbing them requires a fairly strenuous, wet, and muddy 9.8-mile hike with 2700′ of elevation gain, and most people do it as a day hike. There are a couple of easy stream crossings along the route, but they’re running really low this summer and easy to cross without getting your footwear too wet. They become a lot higher consequence though in early spring and late fall when the temperatures are colder and the water levels are higher.

This was my fourteenth time out to the peaks and my second trip in the past few weeks. In addition to climbing the mountains in every month of the year for my White Mountains 4000 Footer Grid, I was looking forward to fishing the North Fork of the Hancock Branch of the East Pemigewasset River, which flows alongside the Cedar Brook and Hancock Notch Trails. I’d caught a bunch of brook trout there on a day hike to the Hancocks in July, but this time I wanted to spend more time fishing the river by backpacking the route and camping out overnight.

I got an early start and hiked down the Hancock Notch Trail which runs above and alongside the upper part of the river I hoped to fish. I’m surprised I didn’t fall flat on my face during this portion of the hike, since I was studying the river from above and scouting possible areas to camp out.

Unfortunately, the area to the Hancocks has been overrun by illegal camping, less than 200 feet from the trail. It’s been bad for years, but I think it came to a head last year, in year 1 of the Pandemic, when everyone in the Northeastern United States decided to go hiking in the White Mountains. It’s much better this year, especially on weekdays, when the National Forest empties out of visitors. Most of the White Mountains are still unspoiled, but this particular area is close to a major road and packed with nearby attractions.

I turned onto the Cedar Brook Trail which gets progressively more challenging and muddy as you approach the Hancock Loop. This section of the trail has seen some major reroutes in the ten years, which have reduced the number of stream crossings required to reach the Hancocks and made the route somewhat easier to hike.

While the upper part of the North Fork runs alongside the lower part of this trail or just a short bushwhack below it, it’s pretty small and full of forest debris. While I did catch some wild brook trout in it on my previous reconnoiter, it was a hassle to keep from getting my flies and line from being caught in the surrounding vegetation. While I like fishing smaller streams, there’s a limit to how small I’ll go.

The Cedar Brook Trail gets progressively rougher as you approach the Hancock Loop Trail (from the south) and you don’t even realize that you’re gaining significant elevation until you’re at the foot of South Hancock and ready to begin the climb up its summit. While the first 1.6 miles of the Hancock Loop Trail climb 1600′ in 1.6 miles, its that final ascent from 3400′ to 4319′ that’s the hardest, gaining 900′ in 0.3 miles.  That climb really kicked my ass in July, because it is super steep and the footing is very poor with lots of trail erosion. I also climbed it on a very hot and humid day, where I was drenched in sweat.

But the weather was slightly better for this hike and I’d had the foresight to wear convertible hiking pants this time, without the legs, for better ventilation. Despite carrying a full overnight pack, I found the climb less strenuous, because I’ve been climbing so many 4000 footers recently. Much as I love hiking all the trails in the White Mountain Guide or bushwhacking New Hampshire’s 500 Highest Peaks, they’re just not as physically strenuous as hiking the White Mountains 4000 Footer Grid, which whips you into shape quickly.

When I reached the top of South Hancock, I didn’t bother stopping to take in the views because there were none. Both peaks were still covered in low clouds. Eager to get fishing, I continued hiking along the ridge connecting the South and North summits. I came across a few people along the way, hiking from the North peak to South Hancock.

This got me wondering about whether people have a preference for climbing North Hancock first or South Hancock. They’re both in a loop so it doesn’t matter distance-wise. I can only recall one trip where I’ve hiked the Northern summit first and I continue to climb the South peak first to this day.

There is a halfway decent viewpoint on North Hancock where I stopped for a drink and a snack. There were now a few gaps in the fog,  but it was pretty hit or miss. I chatted with a couple there that were climbing the Hancocks for the first time, before packing up and heading out.

The trail down the south face of North Hancock is pretty heavily eroded, worse than on South Hancock, but it’s still a pretty easy descent if you watch your footwork. You can’t see it through the vegetation, but there’s an avalanche slide called Arrow Slide (pictured above) that some people climb to summit the mountain. It’s probably not much worse, footing-wise, than climbing up the regular Hancock Loop trail to the north peak. I say that tougue-in-cheek because slides can really be quite challenging and hazardous to scramble up. They’re often very slippery with water running down slick rock and not to be tackled without a good hiking partner in tow.

Once down, I backtracked to the Hancock Notch Trail eager to get on the water. I picked up where I’d left off on my previous trip and continued working my way down the river. It might be generous to call the North Fork a river when it’s barely a rod cast wide.

I put the bottom of my convertible hiking pants on since this part of the trip was going to involve some bushwhacking and scrambling along the riverside boulders, before a very short bushwhack to the stream. I tied on a small #16 red fly and caught a fish on my first cast. That pretty much set the tone for the rest of the day, but my black gnat ended up being a better producer in the end.

I think the wild brook trout on the rivers I fish are exhibiting a preference for terrestrial-looking flies, which is a pattern I’ve observed previously in the month of August. My black gnats, a pattern called a Griffith’s Gnat, which is technically a midge, can look like any number of black bugs, especially the black spiders which you see crawling on river rocks throughout the whites. I didn’t have any black ants in my fly box, but you can bet I plan on tieing some up soon.

The North Fork is fairly open overhead so you don’t have to worry too much about getting your line caught in the trees. You can also scramble along the banks fairly as you work your way downstream without having to do much bushwhacking. I did cross back and forth many times to avoid obstructions, but still managed to keep my leather hiking boots dry.

There are some large pools near the start of the Hancock Notch Trail close to the trailhead which are used by hikers and visitors as swimming holes and are therefore largely devoid of any fish. Bypass those…they’ll be obvious..and continue working your way downstream to find plenty more wild trout. They won’t be big, but they are feisty, and you can expect a few duels.

If you want to spend the night on the river and camp out, you’ll probably want to use one of the pre-existing campsites to reduce your impact, as long as it’s legal. God knows, they’re hard to avoid along the Hancock Notch Trail due to overuse. That’s better than creating a new campsite. Still, be sure to read up on the White Mountains Backcountry Camping Rules before you go. They only protect the National Forest if we all follow them.

Philip Werner has hiked and backpacked over 7500 miles in the United States and the UK and written over 2500 articles as the founder of SectionHiker.com, noted for its backpacking gear reviews and hiking FAQs. A devotee of New Hampshire and Maine hiking and backpacking, Philip is the 36th person to hike all 650 of the hiking trails in the White Mountain Guide, a distance of approximately 2500 miles, completing a second round in 2021. Philip is the author of Backpacking the White Mountain 4000 Footers, a free online guidebook of the best backpacking trips in the White Mountains in New Hampshire and Maine. He lives in New Hampshire.
Editor's note: If you’re thinking about buying gear that we’ve reviewed or recommend on SectionHiker, you can help support us in the process. Just click on any of the seller links above, and if you make a purchase, we may (but not always) receive a small percentage of the transaction. The cost of the product is the same to you but this helps us continue to test and write unsponsored and independent gear reviews, beginner FAQs, and free hiking guides. Thanks and we appreciate your support!
Previous Big Agnes Copper Spur HV UL 2 Tent Review
Next Do You Need a Hammock Ground Cloth?