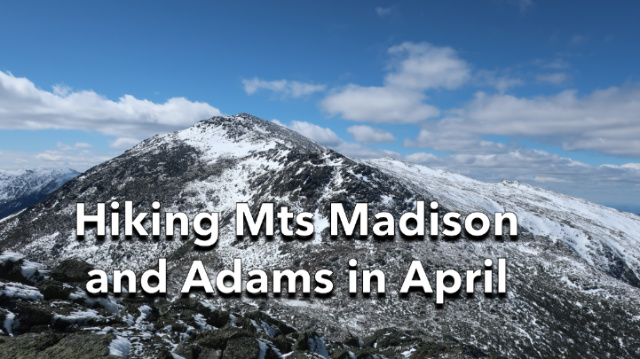 Mt Madison (5367′) and Mt Adams (5774′) are two mountains in the Northern Presidential Range of the White Mountains. Madison is the fifth tallest 4000 footer in the Whites, while Adams is the second tallest, after Mt Washington, which is #1. Climbing Madison and Adams is a tough hike, at any time of year. While the round trip distance (from the Appalachia Trailhead) is only about 10 miles, the route requires 5000′ of elevation gain which makes for a long day.

My hiking partner Ken and I hiked up Madison and Adams this week for our White Mountian 4000 Footer grids, which require hiking all 48 of the 4000 footers once in each calendar month for a total of 576 summits. The weather forecast was favorable for April with temperatures in the 20’s (F) and winds dropping from 35 mph down to 20 mph by afternoon. Together with brilliant sunshine, this meant we could probably get by without face protection against frostbite.

April is a tricky month to climb 4000 footers because it’s still winter in the higher elevations, while the valleys are largely snow-free. That means you have to be prepared and carry gear for both seasons since you can’t be sure what you’ll encounter at elevation. Trail conditions can also vary widely during the course of a hike, again depending on elevation, and also by time of day, when icy morning trails turn to slush or mashed potatoes by the afternoon when the sun has warmed them up.

Ken and I met at the Appalachia Trailhead, which is the main parking lot for climbing the Northern Presidentials, and headed up the Valley Way Trail, which runs to the Madison Springs Hut in the col between Madison and Adams. We hiked on bare ground and through mud before hitting ice and snow about 500′ (of elevation) up. We switched to Hillsound Trail Crampons, which are really sharp microspikes when we hit ice and frozen snow. That kind of surface is easy to hike on, but we soon encountered a thin layer of fresh snow, which started to ball up in our spikes. That ceased after we continued higher and it got a bit colder.

The Valley Way Trail is a relentless climb up to the Madison Spring Hut, which incidentally, is closed all winter. But it’s the trail that most people climb to treeline, so its surface conditions are well documented on New England Trail Conditions. So we expected a large ice dome on the trail at 3000′ which we were able to skirt along the side without much trouble. From there, we started hitting soft unpacked snow which made the hiking more strenuous, because you’d sink backward a little with every uphill step you took.

We finally made it to the very faded “Stop Sign” at treeline and arrived at the Madison Spring Hut shortly after. There we ran into my friend Sandy who was climbing Madison. She’s a real inspiration: she’s well over 70 and is over 80% of the way through her second White Mountain 4000 footer grid. I chalk that up to her love of the mountains and good genes – I know from talking to her that the women in her family live a long, long time. She’s a babe by comparison!

We took a break to eat and drink something and then hiked up to the summit of Madison, through a maze of boulders, ice and packed snow on the Osgood Trail (the AT). I kept my trail crampons on but Ken shed his and just rock hopped; you really could go either way. The prevailing northwesterly winds were pretty pushy and cold, so I flipped up my hardshell hood to stay warmer and protect my face. The wind died down when we got near to the summit and the trail swings north, putting the peak between us and the wind, but we got a full-frontal blast when we summited. We didn’t linger, tagged the peak, and headed back down to the hut.

After another short snack and water, we headed up the Gulfside Trail to the bottom of Adam’s summit cone. Like Madison, this is a huge cone of ankle-twisting boulders. Adams is harder to climb though because the boulders have deep voids between them, so you need to be much more sure of your steps. That’s not the case on Madison where you can see bottom.

We headed up the Airline Trail, following the rock cairns marking the route to the summit. There’s no clear “trail” so you have to pick your way between the boulders and pick a route that conserves as much energy as possible on the climb.

The bottom half of the ascent just required rock-hopping, but the final 0.2 miles got pretty icy. It’s wasn’t clear or blue ice, but a combination of high angle rime and frozen snow pockmarked by hundreds of crampon scars.

While the climb had been windy, the summit of Adams wasn’t windy at all. Go figure.

We paused to take in the views of Mt Washington and Mt Jefferson and took some summit photos before picking our way back down the maze of cairns back down to the Gulfside Trail and the hut.

From there it was a long and slushy descent back down Valley Way to the trailhead below.

SectionHiker is reader-supported. We independently research, test, and rate the best products. We only make money if you purchase a product through our affiliate links. Help us continue to test and write unsponsored and independent gear reviews, beginner FAQs, and free hiking guides.
Previous Gossamer Gear Twinn Tarp Review
Next What is a Semi-Freestanding Tent?