Hiking Pierce and Eisenhower in February 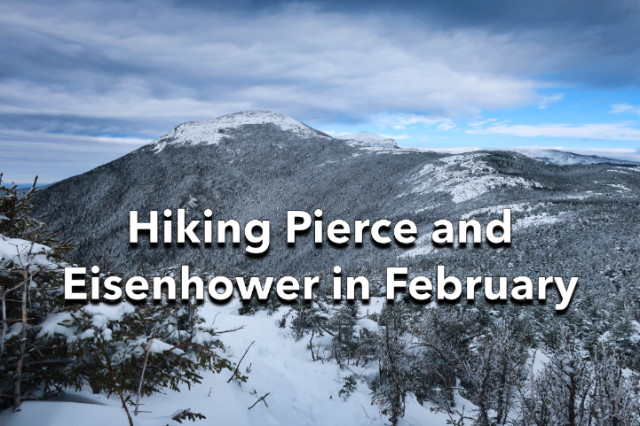 Mt Pierce and Mt Eisenhower are two 4000 footers in the Southern Presidential Range which runs between Crawford Notch and Mt Washington. The route up to these two peaks follows the Crawford Path, which is the oldest continuously maintained hiking trail in the United States.

Getting to Pierce in winter is pretty easy because this section of trail is very heavily used, but hiking beyond it to Mt Eisenhower is more difficult because there’s a long above-treeline stretch before you reach the final ascent up “Ike’s” bald dome. While this is a fairly casual hike in warm weather, it’s not to be taken lightly in February, without proper winter gear, experience, and conditioning. In addition to the wind and frostbite danger, deep snowdrifts form in between the small trees (Krumholz) that delineate the path obscuring it completely. You don’t want to attempt this section without snowshoes or solo, because falling into a spruce trap (a void in the bushes covered by snow) can be fatal if you can’t get out under your own power. Of course, that doesn’t stop some idiots from trying both.

I was joined on this hike by my regular hiking partners Karen and Ken, who are also working on their White Mountain 4000 Grids. You couldn’t ask for two nicer, experienced, and sensible hiking partners, and we’ve had many adventures together. This would prove to be another one.

This was the first weekend after we got two feet of snow in the White Mountains, so trail breaking with snowshoes was on the menu for most summit attempts. The day started off cold at -11F at the trailhead, which caught me off guard. I was expecting a warmer start, but we were soon layering off as we climbed up the Crawford Path to Pierce, which climbs 3.1 miles to the short trail leading the summit cairn. This section of the Crawford Path is protected from the wind by trees, so we didn’t have to wear face protection or more windproof layers.

Pierce itself is more exposed to the wind, but there are some small trees around the summit cairn, where we gulped down some hot water and food, before setting off to climb Eisenhower. The sun was shining brightly, so I switched to my polarized sunglasses, put on my heavily insulated mountaineering gloves, and moved my balaclava to my front pack for easy access.

We immediately hit deep snowdrifts and wind slabs as tall as the dwarf trees that protect portions of the trail between Pierce and Eisenhower. The wind was from the Southeast, so these dwarf trees protected us from its full effect, but it was still cold and I put another insulating layer over the three I was already wearing.

As we made our way toward Eisenhower, the snow got deeper and deeper, until we were literally postholing in thigh-deep powder even though we were all wearing snowshoes. The trail became increasingly hard to follow as the drifts deepened and we were forced to “bushwhack” around sections that were completely buried and impassable. Out in the open now, Karen and I donned face protection because we were worried about frostbite. The winds were probably only 20 mph, but I was losing some sensation on my cheeks and knew I’d need a mask for the bald summit of Eisenhower.

When we reached the summit spur, named the Eisenhower Loop, we hit a brick wall, so to speak. We couldn’t get up the final slope because the powder at the base of the climb kept collapsing underneath us. We’d made it this far and I wasn’t going to give up so close to the summit. Then I had an idea.

Using my trekking poles, I pulled the snow down off the rocks at the base of the climb, so I could get a better purchase with my snowshoe cleats. Once I’d climbed those, it was a matter of zig-zagging up the slope on the south-facing wind slab, which had the consistency of styrofoam but provides good traction. Soon we were on the summit, admiring the view of Mt Washington just to the north.

The hike back out and down was quite fast because we’d done all the hard work on the way up. As Ken remarked when we got back to the trailhead, “It’s been a while since I had to break trail like that.” Yes, indeed. He fell asleep as soon as he got home.

SectionHiker is read supported. We independently research, test, and rate the best products. We only make money if you purchase a product through our affiliate links. Help us continue to test and write unsponsored and independent gear reviews, beginner FAQs, and free hiking guides.
Previous Hiking After Knee Replacement Surgery
Next Slingfin SplitWing Shelter Review