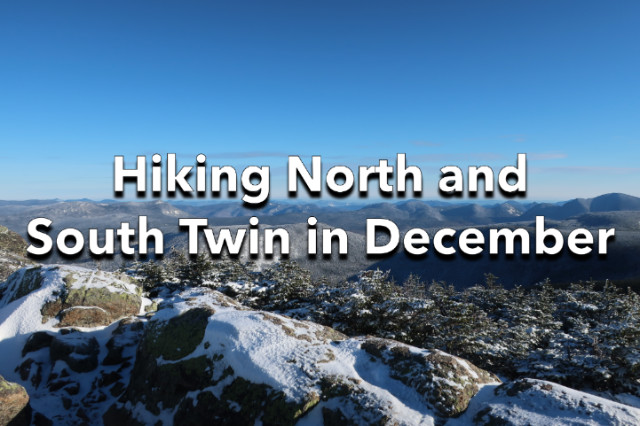 North (4761′) and South Twin (4902′) are two mountains on the north side of the Pemigewasset Wilderness. They’re difficult to climb in winter conditions because the road leading to the trailhead is gated closed in winter. There’s also a hazardous water crossing across the Little River at the bottom of the climb to North Twin, where getting your boots wet is a real possibility if the crossing is not bridged. That would be a good reason to abort the hike and head back to your car before your boots and feet freeze.

Despite the hazards, Ken and I decided to have a go at these two peaks the day after our first significant snowfall in the Whites. We’d gotten close to 6″ of light powder which we hoped would be enough to give us some decent traction over the thick layer of ice that’s coating the Whites for the past week. Perhaps more importantly, this was the only day that an ascent would really be feasible with high winds forecast for the remainder of the week. South Twin, more than North, has an above treeline segment that can be tricky a stiff breeze. .

We were joined on this hike by our friend Wanda who’s a very experienced winter hiker, has completed the four-season Grid, and is a long-time instructor with the AMC’s mountain leadership school. She’s been on a few of our recent hikes, including Mt Isolation at the beginning of December. She’s also a long-term contributor to SectionHiker.com. Check out her articles.

While the road to the trailhead is not accessible, you can hike down a snowmobile trail to reach it (Click for directions.) There have been a lot of parking and landowner issues involved in gaining access to this trail, but I don’t plan on rehashing all that here. Please, for your own sake and the continued goodwill of the landowner, obey the signage.

North and South Twin in Winter

I’ve been on a lot of difficult winter hikes this month, but this hike kicked my ass. My transition times were really slow – the time it takes to take off your pack, find the gear in your pack, change layers or traction, pack back up and start hiking again. This meant I had less time to graze during breaks before my friends took off, and I didn’t consume enough calories.

Much as I like my Gossamer Gear Gorilla 50 for winter hiking, it’s just too hard to use when I have to carry multiple forms of traction at once, as I did on this hike: snowshoes, microspikes, and crampons. It has this irritating top closure, awkwardly positioned straps, and tiny webbing buckles that freeze when they get wet and are impossible to manipulate wearing gloves. It’s also getting ripped to shreds by winter vegetation, judging by the amount of Tenacious Tape I’ve had to use to patch holes this month. I think it’s time to switch to a different pack that’s more appropriate for winter use: either my HMG Southwest 3400 or possibly a Cold Cold World Chernobyl.

I also had problems breathing on this hike and I think my cold weather asthma was bothering me. We started out in 8-degree weather, that’s Fahrenheit, and then gained several thousand feet of elevation. I had trouble breathing on the steeper portions of the climb to North Twin and was overcome with mucous/coughing for much of the hike. This condition is easily managed with a prescription inhaler, but kind of caught me off guard because I haven’t done a lot of winter peakbagging in single-digit weather for a few years.

We still managed to make good time and reached the summits, but I had a lot on my mind and didn’t enjoy the hike as much as I would have liked. In fact, we all experienced issues on this hike, but as Ken says, “What doesn’t kill you, makes you stronger.” But, we’ll have a rematch as soon as next month.

This was the second month in a row that I climbed this route, to the day, although it was more challenging this time since there was more ice and unpacked powder on the trail. Despite a very cold start, the wind above treeline was quite mild, all things considered.

Once we reached the North Twin Trail trailhead, the hike up to the 3rd stream crossing was easy and fast. In winter, most people follow the bypass route described in the White Mountain Guide (at least those people who read it) which skips the first two river crossings.

The river is quite cold and it’s best to avoid getting wet when crossing it. We scouted the 3rd crossing which looked deep and bushwhacked a bit upstream to look at another crossing, but there was no bank on the other side, so we skipped it too. I suggested crossing below the regular 3rd crossing where the water was shallower, so we donned our waders and crossed successfully. Ken and I took turns using my Wiggy’s Waders and Wanda brought waders made from contractor’s bags.

Once across, we started the long climb up the North Twin Trail. Despite the recent snowfall and cold weather, the trail was still quite bony (rocky) with water flowing down the middle. As we climbed and it got colder, the water turned to slush and then hard ice, topped by several inches of powdery snow. Despite the snow, the footing was slippery and awful, necessitating the use of spikes because it was too rocky still for snowshoes.

Once you cross the river, the North Twin Trail climbs 2350′ in 2.2 miles in what Steve Smith, author of The 4000 Footers of the White Mountain calls a “grind”. We took turns leading on the climb, switching off every 30 minutes until we reached the first outlook, which was sunny and relatively warm. The actual summit is a short distance from this point, marked by a small pile of stones, before a grand view of the Garfield and Franconia ridgelines.

At the beginning of our hike, I argued that we should carry snowshoes on this hike, something that my friends complained about all the way up the climb to North Twin. Winter hikers hate carrying these things because they weigh 5 lbs/pair. But they came in very handy for hiking through the deep powder that accumulates between North Twin and South Twin.

We descended into the col between North Twin and South Twin and into deep powder, unlike anything we’d encountered so far. South Twin loomed ahead of us, requiring another 450′ climb to the summit. Our energy levels were all flagging, but flipping up my snowshoe televators helped with the climb to the next peak.

South Twin is the eighth highest mountain in the Whites and it is mammoth, requiring a long ridgeline snowshoe along its northern spine. A pair of hikers had obviously preceded us without snowshoes, judging by the deep postholes they’d left behind. I don’t think I would have made it to the South Twin summit if we’d barebooted in their tracks without snowshoes. The unconsolidated powder would have just been too slippery to get much traction.

We reach the summit of South Twin Mountain at 2:00 pm, 6 hours since the start of our hike, and 7.1 miles in from our cars. That was the easy part! Now we had to hike out the same way we’d come, and with sunset at 4:00 pm.

I’ll spare you a blow by blow of the details, but we made back over North Twin, across the river, back to the trailhead, and down the logging road back to our cars in 4 more hours. In total, we’d hiked and snowshoed 14.2 miles with 4000′ of elevation in 10 hours.

It’d been a long day, and we get to do it again in January and again in February for our White Mountain 4000 footer Grids! My respect for people who’ve completed this uber peak list grows each month.

Editor's note: If you’re thinking about buying gear that we’ve reviewed or recommend on SectionHiker, you can help support us in the process. Just click on any of the seller links above, and if you make a purchase, we may (but not always) receive a small percentage of the transaction. The cost of the product is the same to you but this helps us continue to test and write unsponsored and independent gear reviews, beginner FAQs, and free hiking guides. Thanks and we appreciate your support!
Previous How to Set Up a Tent on Sand
Next Desert Campsite Selection Tips