How Big is your Backpacking Knife? 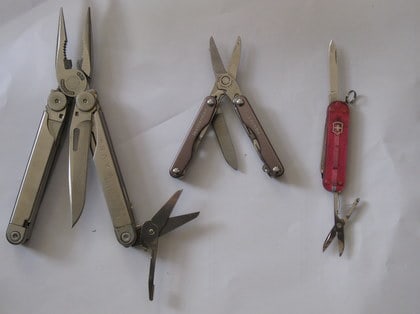 This article is in response to Jason’s Klass’ post In defense of the knife. Jason believes that a knife is important to carry in the backcountry. His preference is a 2.6 oz. Spyderco Delica 4. A perfectly logical choice, except maybe the part about defending yourself from mountain lions.

But in addition, I would argue that you also want to bring along a pair of scissors. I use these far more often than I use a knife. They’re good for cutting moleskin, trimming toenails and blisters, opening freeze-dried meals, trimming tarp guylines and clothing tags, emergency sewing repairs, trimming my mustache, and so on.

My favorite knife and scissor combo is the Swiss Army Classic, weighing just 0.7 oz, which includes a scissor, tweezers, a sharp but short knife, and a nail file that has a screwdriver head. I carry it clipped to a Mountain Laurel Designs mini-biner that’s attached to an exterior compression strap on my pack, so it’s always handy and I never lose it.

Before I switched to the Swiss Army Classic, I used a 1.7 oz. Leatherman Squirt S4, but it was more tool than I needed. It has an excellent pair of scissors, knife, screwdriver, bottle opener, and a set of tweezers. One could argue that the bottle opener is more important than a pair of scissors.

Before I got the Leatherman Squirt S4, I had a 7.8 oz. Leatherman Wave. It’s huge but much sturdier than the Squirt. The Wave has a built-in pair of regular and needle nose pliers, wire cutters, a serrated knife, and a smooth knife, a saw, a not-so-functional pair of scissors, several screwdriver heads, and a stout file. It’s a good mountaineering knife, come to think of it, for repairing protection, sharpening and straightening crampons, and other heavier-duty applications. I could also see carrying it again if and when I switch to a wood stove, particularly for cutting up kindling, although I met a guy recently who carries a hatchet with him instead of a knife, for just this purpose.

So, to conclude: it’s not the size of your knife that counts, but whether you have a scissor.

SectionHiker is reader-supported. We independently research, test, and rate the best products. We only make money if you purchase a product through our affiliate links. Help us continue to test and write unsponsored and independent gear reviews, beginner FAQs, and free hiking guides.
Previous Vegan Sleeping Bags
Next Mountain Hardware Phantom Down Jacket