How to Build Snow Shelters 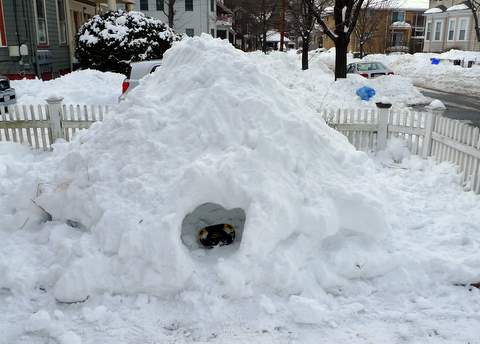 Building snow shelters is an important winter skill which can be used in emergency situations in the backcountry. Snow is a great insulator and works by preventing warm trapped in its crystalline structure from escaping. But more importantly perhaps, is that snow and snow structures provide a very effective barrier against wind chill, which greatly accelerates bodily cooling in winter.

If you want to learn how to build a wide variety of snow shelters, I recommend you get How to Build an Igloo: And Other Snow Shelters. This book is full of cartoon-style illustrations that show you how to build a variety of shelters including igloos, slab shelters, snow trenches, shelters built out of spruce traps, drift caves, windbreaks and quinzees. It contains very useful information about the structural and insulating properties of snow, the best tools for building snow shelters, safety considerations, and history.

We have a lot of snow at my house and I’ve built several of the shelters illustrated in How to Build an Igloo in my front yard, with varying degrees of success. I’d planned on practicing these in New Hampshire this winter, but there’s no need to drive 2-3 hours to the mountains when we have all of this snow here in Boston!

I’m still digging a quinzee, pictured above. The first step in quinzee construction is to pile up a lot of snow in a mound and let it harden up under the pressure of its own weight. After that, you carve out a cavern inside of it and poke an air hole through the top. They take a lot of work to build and you need at least two people to dig them out. I wouldn’t recommend building one unless you have most of a full day to work on it.

Building one by myself has been slow going, but instructive. I started digging mine out using a snow claw, which is a plastic disk that you can use as a substitute for carrying a full avalanche shovel on overnights. This proved to be very tiring, especially on my wrists, which bear the weight of the snow when I remove it from the inside of the mound.

Digging out a quinzee requires a shovel, but snow claw is still very useful for carving the curved inner walls and making sure they’re smooth. It is also very good for increasing interior space because you can carve very close to the outer surface of the quinzee’s walls.

Snow blocks facilitate the construction of igloos, a-frame style slab shelters, windbreaks, and covered snow trenches. Snow blocks are used mainly for building higher cost shelters and require multiple people and sufficient time to build. The best kind of snow for snow blocks is cold, dense snow that has been wind packed by continuous wind action and is found in fields or mountain location above treeline.

I tried to carve snow blocks out a sheet cake (raised platform) of stomped down snow at my house, but it didn’t work, and they fell apart too easily.

Alternatively, it is possible to cut crust blocks: when the surface of the snowpack thaws and refreezes, a hard crust or icy glaze forms on its surface. Beneath this hardened surface, there is a layer of ice crystals, several inches thick, attached to the hardened crust. Blocks can be cut from the surface as is, or the surface can be stomped down, and then cut using a shovel, to form thinner blocks that can also be used for construction purposes.

The are several types of expedient snow shelters including tarp-covered snow trenches, trenches under pyramid tarps, and mounded walls. These are the types of shelters I envision myself using in the mountains because they are quick to build and provide sufficient shelter from the wind and elements when used in combination with a bivy bag.

To practice these, I started by building a rectangular snow trench about 3 feet deep, 3 feet wide, and 8 feet long. Although you can use a snow trench alone with a bivy bag as a windbreak, I decided to try some variations with a flat 9 oz silnylon tarp.

The first variant I tried uses hiking poles and/or skis to span the trench. I laid my tarp on top and then tried to anchor the sides with snow to keep the wind from blowing the tarp off. This didn’t work very well for a few reasons: 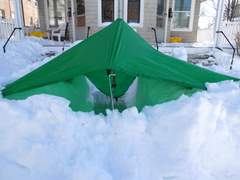 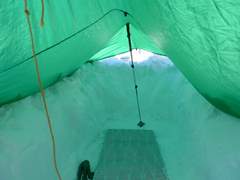 
The next tarp variant I tried was to pitch the tarp above the trench, A-frame style. This was much more wind resistant and luxuriously spacious inside but requires one or two poles to form the A-frame, limiting the number of anchors you have available to hold down the tarp if you’re forced to use gear as improvised anchors. As with the flat tarp pitch, eliminating the open end of the trench is key, but narrowing the trench is less important – and this variant is ideal for two people, given the interior room.

Using snow to build emergency shelters in winter is an important survival skill and well worth practicing if you plan on camping in the backcountry in winter or you’re interested in traveling as light as possible by bringing a tarp instead of a tent. All you really need is a shovel, some snow, and a little know-how to get started.

SectionHiker is reader-supported. We independently research, test, and rate the best products. We only make money if you purchase a product through our affiliate links. Help us continue to test and write unsponsored and independent gear reviews, beginner FAQs, and free hiking guides.
Previous Neoprene Winter Glove Idea
Next Lens-Pen: Nikon Lens Cleaning System