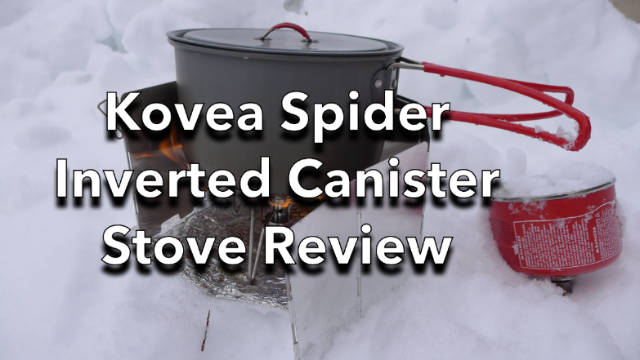 Weighing just 6.0 ounces, the Kovea Spider is an excellent four season stove for group camping and solo backpacking, down to about 0 degrees Fahrenheit. When the temperature drops below 15 degrees, you can turn your canister upside down and burn the liquid component of the fuel in the canister.

First and foremost, the Kovea Spider can be used with different pots of all shapes and sizes, making it convenient for group camping as well as solo backpacking trips. The stove has an integrated locking pot stand, set very low to the ground, which provides excellent stability for tall skinny pots and squat wide ones. I’ve cooked everything from multi-person meals to one-pot ramen dinners using this stove and if you only want to buy one canister stove for car camping and backpacking, it’s a best buy.

Second, the Kovea Spider, like other remote canister stoves, can be used with a windscreen to improve stove efficiency. This is unsafe when using a stove burner that screws directly into the threaded connector on top of an isobutane canister because the canister can overheat and explode like a grenade. Using a stove screen is particularly important in winter when melting snow for drinking water because you want all the heat to hit the bottom of the pot and not be lost up the pot’s sides.

Finally, the Kovea Spider can operate at colder temperatures than regular canister stoves because the canister can be turned update down or inverted when outside temperatures drop below 15 degrees Fahrenheit and the pressure inside an isobutane canister drops too low to vaporize.

By inverting the canister, the Kovea Spider can burn the fuel inside the canister in its liquid form down to about 0 degrees Fahrenheit, giving you a 10-15 degree advantage over regular canister stoves that can only burn isobutane in its vapor form.

When you turn a gas canister upside down, the canister fuel flows down the Spider’s fuel hose to the burner where it’s preheated before reaching the burner head. The Spider has a bronze-colored tube, which you can see in the photo above, which raises the temperature of the fuel so it can vaporize just like it would if the air temperature was warmer and the canister was positioned right side up.

If there’s a downside to running the Kovea Spider in inverted canister mode, it’s that the flow of fuel becomes a little harder to control and more like a regular liquid fuel (white gas) stove. For example, when you turn off the fuel valve, the fuel in the line has to burn off completely before the flame goes out. The same holds during ignition, when you can experience a bit of a fireball when lighting the stove.

The Kovea Spider does not have an integrated piezo lighter, unlike many regular canister stoves, where the burner is mated with the canister. Instead, the stove comes with an easy-to-lose, push-button piezo wand. While the peizo works great in warmer temperatures when burning your fuel as vapor, it stops working in cold temperatures (which piezos are known to do) when you’re likely to use the stove in inverted canister mode. For colder weather, you’ll want to bring an ignition source that will throw a bigger spark or flame, like a fire steel or matches.

One of the nice features of the Kovea Spider, beyond its utility in hot and cold temperatures, is the packability of the stove, which can fit in a one liter cooking pot with a large fuel canister. If you’ve ever tried to pack a conventional white gas stove that requires a separate liquid fuel bottle, you can appreciate the smaller footprint of the Kovea Spider for cold weather use.

Weighing just 6.0 ounces, the Kovea Spider is an excellent four-season stove for group camping and solo backpacking, down to about 0 degrees Fahrenheit. If you plan on camping or backpacking in colder temperatures, then that you probably want to consider getting a liquid fuel (white gas stove) or a multi-fuel stove like the MSR Universal which can burn canister gas and white gas.

If you’ve never heard of the Kovea brand, they’re quite well-known in the backpacking community for the quality of their stove design and construction. They also manufacture many of the stoves sold today in the United States under other brand names.

Disclosure: Kovea provided the author with a sample stove for this review.

Editor's note: If you’re thinking about buying gear that we’ve reviewed or recommend on SectionHiker, you can help support us in the process. Just click on any of the seller links above, and if you make a purchase, we may (but not always) receive a small percentage of the transaction. The cost of the product is the same to you but this helps us continue to test and write unsponsored and independent gear reviews, beginner FAQs, and free hiking guides. Thanks and we appreciate your support!
Previous Elemental Horizons Kalais XT Backpack Review
Next Swiss Army Classic Pocket Knife – Long Term Review