Middle Tripyramid and the Sleepers

I got back up to the White Mountains on Saturday and climbed Middle Tripyramid (4,140 ft) on the White Mountain 4,000 footer list. I’m getting near the end of that list and hope to finish it off by early autumn.

Saturday’s hike also included ascents of South Tripyramid (4,100 ft), West Sleeper (3,881 ft), and East Sleeper (3,840 ft). Temperatures were in the 80’s (F) and it was hot, a stark contrast to my ascent of North Tripyramid this winter, where we had to plow through thigh deep snow.

As usual, I left the house early for the drive up the New Hampshire, leaving the house at 4:40 am. There’s never any traffic at this time of day and I shot up to the Kancamagus Highway, which borders the north side of the Sandwich Range, arriving at the trail head by 7:20 am.

My route took me 4.6 miles up the Sabbaday Brook Trail to the Tripyramid Loop Trail which links all three of the Tripyramid peaks. From there, I hiked south climbing the peak of Middle Tripyramid and then South Tripyramid (4,100). Heading southeast, I climbed about half way down the south facing slide on South Tripyramid to the junction with the Kate Sleeper Trail, and followed it another 2.5 miles over West Sleeper and East Sleeper.

I had originally planned to turnaround and hike out the way I came, to bag a trail-less peak called The Fool Killer (3,548 ft), northeast  of Middle Tripyramid, but there was no water along the ridge and I had run out. With the heat, I decided to descend the Downes Brook Trail, which had abundant water, and take that back to the Kancamagus Highway and my car, about 6 miles north.

The total distance for this hike was 15 miles in 9 hours with about 4,000 ft of ascent.

My change of plan turned out exceptionally well because Downes Brook is an beautiful stream on par with the West Branch of the Peabody River in the Great Gulf. Who knew? It’s certainly not mentioned in the White Mountain Guide.

When I arrived at the Sabbaday Trail Head parking lot at 7:20 am, I was the second car in the lot. When I hiked back at 4:30 pm, there were over 40 cars. That’s because there’s a beautiful water fall called Sabbaday Falls at the very base of the trail. Being so early, I got to have it all to myself.

Since the trail was unclear, I followed Sabbaday Brook for about a mile, making do with the tracks I could find, until I reached the farthest extent of the trail. I found a yellow blaze, which I assumed was the trail, and headed up it.

The elevation of the parking lot is about 400 feet and the elevation at the end of the trail, 4.6 miles away, is about 4,100 feet. That said, the trail is not hard to climb, just rugged with lots of boulder hopping, and on par with the Garfield or Gale River Trails in difficulty, if you’ve ever hiked up those.

The trail follows Sabbaday Brook closely for about 3.5 miles and requires numerous stream crossing. I lost track of how many I did during the course of the day, but it probably exceeded two dozen up this trail and down Downes Brook. I was wearing trail runners and the water didn’t slow me down one bit. In fact, it was a relief on such a hot day to immerse my feet in the frigid stream water.

Towards it’s end, the trail climbs steeply up to Middle Tripyramid, and the last 1/3 mile is 50-60 degree ledge, requiring good scrambling skills. This section must be murder in the winter, requiring crampons, an ice axe, and guts. The views however of Mt. Whiteface and Passaconaway are great, if you dare turn around.

I arrived at the intersection with the Tryipyramid Loop Trail at 10:30 am, had a snack, and watered up. I took the time to check my map position and bearings, something I’d been doing all the way up the trail. I’m making a concerted effort to use my compass more on White Mountain hikes, despite the trail system, because I want to start adding some bushwhacking to my repertoire. It’s easy to carry a compass in the Whites and never use it, and I want to break myself of that habit.

After my break, I climbed the last little bit to the top of Middle Tripyramid before descending the steep col to South Tripyramid. The southern peak is not on the White Mountain 4,000 footer list because its peak is too close to Middle’s, but I still wanted to climb it. From there, things got real interesting.

In addition to its visually distinct three peaks, the Tripyramids are known for their slides, great scars that run down the mountain faces and provide excellent views. My route followed the south slide on the southwest face of south peak. Try saying that quickly! It fell in 1869 and is mostly loose gravel and flat-topped boulders.

About 1/2 way down the slide is a cairn that marks the Kate Sleeper Trail, named after Katherine Sleeper, a local innkeeper from the nearby town of Wonalancet, who was involved in the development of the Sandwich range trail system. I had been alerted to this cairn by two backpackers that I passed on the descent, who had warned me that the intersection was hard to spot.

I turned southeast and headed back into dense forest passing the summit of West Sleeper and taking the detour to the Eastern peak. No views, not water, but the trail quality and level of maintenance are clearly evident. This area is maintained by WODC, the Wonalancet Out Door Club, which does a fantastic job of trail maintenance on all of the trails that they maintain. If you like the Sandwich Range, I’d suggest that you show them your support by buying their waterproof map of the area (1:40,000). It’s only $8.00.

Once I’d passed East Sleeper, I came to a large flat area at 3,000 ft about 1 mile long and 3/4 mile wide. If you have the Map Adventures Map of the White Mountains, this area is just west of Mt. Whiteface. I’ve always wondered what was at this spot and suspected it was a high altitude bog, like the one atop the Nancy Pond Trail.

My suspicions turned out correct and it’s a large grassy, marshy area with clear evidence of moose habitation. There are a lot of great stealthy camping locations here with good water access to the headwaters of Downes Brook. Definitely off the beaten path.

Finding water this far into my hike was good, but there was no turning back at this stage, so I turned north at the Downes Brook Trail to hike out to the Kancamagus and walk a mile back to my car along the road. I had no idea what I’d find on this trail, so I was amazed I guess, at how beautiful it was. 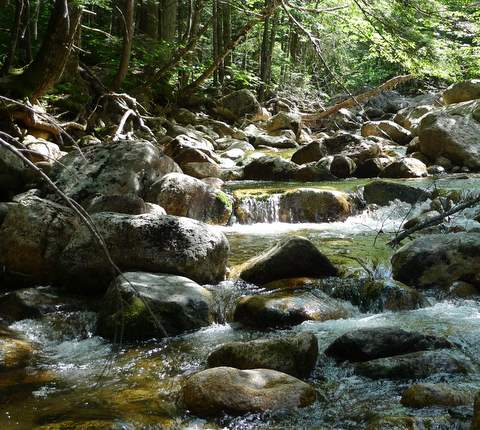 The top of Downes Brook is a dense rocky stream chocked with blow downs. The trail runs alongside the stream and is moderately easy walking. As you descend however, there are a lot of stream crossings. If this is not your kind of thing or you insist on keeping your boots dry, you probably won’t enjoy this route.

Despite the heat of the day, the water is frigid, and when I dipped my bottles in to resupply my water, I couldn’t hold my hands under water long enough to fill a 1 quart bottle because the water was so cold. There’s no snow in evidence on Mt Whiteface which towers above the stream, so I wonder what’s making the water so cold.

As the trail descends, the stream becomes larger and larger, and the moss covered rocks give way to large white boulders and shallow pools. I couldn’t help thinking what a beautiful spot this was and I was enthralled by this unexpected find. I’ll be back. There is excellent camping, a few miles upstream.

The trail down to the Kancamagus is 5.2 miles and I made it down in about 3 hours. From there, I hiked for a mile along the side of the road, past holiday traffic, back to my car. Back in the sun, the temperature was a scorching 86 degrees F, so I stopped in Lincoln at Udderly Delicious for a large ginger and banana hot fudge sundae to sugar up and cool off, before the long drive back to Boston.