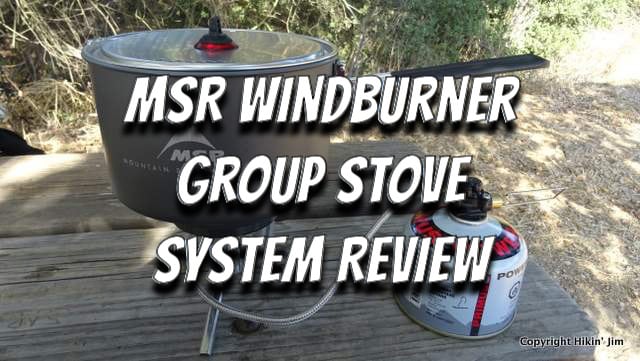 MSR has a group version of their WindBurner canister gas stove system. Whereas other versions are “upright” type stoves (where the burner mounts on top of the canister), this is a “remote” type stove (where the canister is off to the side, connected by a fuel hose).

Two and a half years ago, MSR made a strategic move:  They decided to compete with Jetboil more or less head-on.  How?  With the introduction of the Windburner, an integrated canister stove designed for backpackers.

Yes, MSR did have the Reactor before the WindBurner, but the Reactor was a high-end, specialized stove designed for mountaineers and alpinists rather than backpackers.  The original Reactor was a fairly capacious 1.7 L system, suitable for melting snow. Such a Reactor has an MSRP of $220.  By contrast, the initial offering of the WindBurner was a more backpacker-practical 1.0 L system, a system with a far more reasonable current MSRP of $140.

Apparently, the WindBurner is here to stay.  Just look at how many options MSR has put out.  For the first couple of years, there was only the basic 1.0 L version.  Since then, the following have come out:

Clearly, MSR is going “all in” with the WindBurner.

This review will cover the remote style burner and the 2.5 L pot.

The Switch to Remote Canister

Why did MSR take the time and trouble to develop a new version of their existing burner?

There are typically three reasons for switching to a remote style burner:

Let’s examine each of these in turn:

With the earlier 1.8 L version of the WindBurner, MSR has gotten about as big a pot is as going to be practical on a tall burner like the WindBurner’s original burner.  Get much larger, and the whole assembly is going to be so top-heavy that it won’t be practical.  Stability appears to be the primary reason that MSR has come out with a remote canister burner.  Note:  It is important to set the new remote WindBurner stove up on a firm surface lest one of the legs sink into soft ground and destabilize the stove.

Normally, one of the big advantages of a remote canister stove is that one can safely use a full 360-degree windscreen.  On an upright burner, a full windscreen traps heat in with the canister, creating a potentially deadly explosion hazard.  On a remote canister, the windscreen separates the fuel from the heat and actually makes the stove safer – while at the same time improving wind resistance.  However, a WindBurner is so innately wind-resistant, just from the design of the burner, that a windscreen isn’t typically needed.  I’ll make additional remarks on this subject when I review the pot later on in this review

Canister gas stoves can struggle in cold weather.  The colder it is, the lower the pressure inside the gas canister.  Below a certain point, there just isn’t enough flow to properly cook on.  Open the valve, and hardly anything comes out.  All you’ll get is a little wavering candle-like flicker of a flame, and it might take you 20 minutes to boil a single cup of water – if you can get it to boil at all.

Inverting the canister can significantly improve cold-weather performance if a particular stove can support such.  I won’t go into all the mechanics of how inverted canister operation works here. If you’re interested in the subject, I’ve got a full article here:  Canister stoves in Cold Weather: Regulator Valves and Inverted Canisters.

All is not lost, however.  While the remote WindBurner is not designed to handle inverted canister operation, it still is a regulated valve burner.  One should still have better cold-weather performance compared to conventional burners.  Again, I refer you to my article, Canister stoves in Cold Weather:  Regulator Valves and Inverted Canisters, for the explanation.

Key to cold weather operation for this stove is:

General Comments on the Burner

As one might expect from MSR, the new remote WindBurner burner is a study in polish and professionalism.  It’s incredibly compact for what it is.  Unbelievably, the new remote burner will fit into the original 1.0 L pot with a 100 g canister of gas.  I’m not quite sure how they pulled that off, but pull it off they did.

Also newly introduced, in addition to the remote burner, is a 2.5 L pot with a really nice, ceramic-based non-stick coating.

The new pot is a departure from previous MSR WindBurner pots – there is no heat exchanger. Why no heat exchanger?  I suspect weight is at issue here.  The WindBurner, while a fantastic system, is on the heavy side.  All that amazing windproofness comes at a price:  Weight.  How to reduce some of that weight?  Get rid of the heat exchanger.

Hardly.  The new pot has a nice wide base with lots of surface area to absorb heat.  In addition, the mounting rail will transfer some heat to the pot.  But will the new pot be as efficient as previous versions?  No.

In simul-testing between previous versions of Windburner pots and the new pot, I found that the heat exchanger pots boiled 15 to 20 seconds faster on average, all else being equal.  In order to isolate the effects of the pot from the burner, I randomly interchanged canisters, burners, and pots.  For example, when the new burner was used with a heat exchanger pot, it was faster.  Likewise, when an original burner was used with the new pot, it was slower.

Based on my simul-testing, I found the following to be true:

Note that I typically do my efficiency tests with 500 ml (two cups).  It is innately more efficient to do one larger boil than multiple smaller boils.  For example, it is more efficient to do one boil of two liters than it is to do four boils of 500 ml each.  In other words, for those boiling larger quantities of water at a time (like those who would be interested in buying a 2.5 L system, for example), the larger capacity of the 2.5 L pot will overcome some of the inefficiency associated with the lack of a heat exchanger.

With the new  2.5 L non-heat-exchanger pot, the boil was much more mellow.  For those who wish to do real cooking, this more mellow boil may be an advantage.  Whereas with the original pot, it was hard to keep a boil below a full roiling boil.  With the new pot, it’s a little easier to keep the boil under control.  In addition, since the sides are open on the burner, one can visually observe the burner as it responds to changes in valve setting, making heat adjustment easier.  On the original heat exchanger version, one had to do all heat adjustment based on the sound of the burner, a difficult task.  Now, one can watch the effect on the burner as the valve is adjusted.  However, even with the new remote burner, the burner tended to go out easily at low settings, making a true simmer difficult.  A true simmer is the ability to hold the contents of a pot at or just below a very low boil.  But, while the new Windburner 2.5 L pot isn’t going to meet a gourmet chef’s definition of simmer, it is definitely a better cooking stove than its heat exchanger predecessors.

In addition to the above, the new pot has a colander style, locking lid.  When the lid is locked into place, one can pour off liquids, as in say pasta, while still retaining the solid contents of the pot.

Disadvantages of the new 2.5 L pot

As mentioned earlier, the  2.5 L non-heat exchanger pot is going to

In a perfect world, the new remote WindBurner Group System would be more efficient, weigh less, and make gourmet espresso at the touch of a button, but in this real world, all stoves are a compromise.  For someone looking for a stable, windproof group cooking system, the new remote canister MSR WindBurner Group System is a practical balance of competing design, weight, and price objectives, and I can recommend it highly.  Of course, there are a lot of details – and the devil is often in the details.  Read my review in-depth if you are considering such a system and see if this stove will work for you.

Thanks for joining me on yet another Adventure in Stoving,

Disclosure: The stove in this review was provided at no cost to me by Section Hiker with the understanding that I would review the stove as I saw fit, in other words, with no restrictions or preconditions.  I have reviewed the stove accordingly.  Neither I myself nor Adventures in Stoving have any financial relationship with MSR, the manufacturer of the equipment reviewed.  In addition, I receive no remuneration for the writing of this review nor do I receive any benefit from the sale of any stove discussed in this review.

Hikin’ Jim is an avid hiker and backpacker residing in Southern California.  Jim is something of a backpacking stove aficionado, owning well over a hundred backpacking stoves.   You can find him most any weekend out field testing stove related gear in the local mountains or, in the summer, wandering the Sierra Nevada.  Hikin’ Jim has a blog, Adventures in Stoving, devoted almost exclusively to backpacking stoves, including reviews, general stove tips, and other articles pertaining to the use of stoves in the backcountry.

Check out all of Hikin' Jim's Stove Reviews

SectionHiker is reader-supported. We independently research, test, and rate the best products. We only make money if you purchase a product through our affiliate links. Help us continue to test and write unsponsored and independent gear reviews, beginner FAQs, and free hiking guides.
Previous Jetboil MiniMo Backpacking Stove Review
Next UltraliteSacks Ultralight DCF Compression Sack Review