Philip Werner May 16, 2022 Electronics and Headlamps 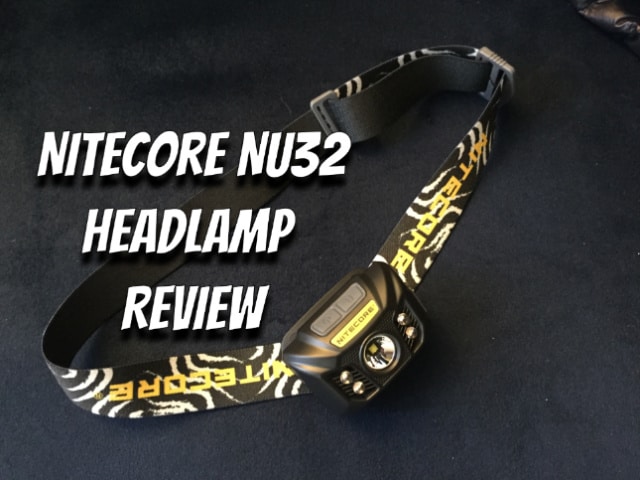 The Nitecore NU32 is a high-powered (max 550 lumens) rechargeable headlamp with white and red lighting modes. It has two control buttons and fairly straightforward control logic, that cycles through its different options so you can actually remember how to use it in the field. But the feature I like the best about this headlamp is that it has a large 1800 mAh lithium-ion battery, the equivalent of 9 AAA batteries, so you have to recharge it far less often. That size battery is rare on headlamps that store their power in the headlamp assembly and not in a remote power pack.

The Nitecore NU32 is a high-powered rechargeable headlamp fitted with five LEDS including white and red lighting modes. It has a maximum light output of 550 lumens (for up to 1 hour), although the high setting of 190 lumens is also quite bright and much longer lasting (17 hours). A digital lock prevents accidental discharge when the light is not in use while a battery meter notifies you when recharging is necessary or has been completed. The headlamp has an easy-to-adjust elastic strap with a 60 degree angle of illumination so you can easily aim the light to where it’s needed most.

The NU32  has two buttons on top of the light housing, a power button to control its white light functions and the other to control the red light. They both make a clicking sound when pressed and are large enough to use while wearing gloves, which is one of the things I like best about this light.

The white light has four modes: turbo (550 lumens), high (190 lumens), mid (33 lumens) and ultra-low (1 lumens) with burn times ranging from 1 hour on turbo,17 hours on high, 50 hours on mid, to 330 hours on ultra-low. The turbo mode turns is self-regulating, so it will begin to lower in intensity to avoid overheating the light after 30 seconds of burn time. I checked with the manufacturer and they could not explain how much the lumen output of the turbo diminishes over time or what the dimming algorithm is. I think the turbo mode is basically hype although it could prove useful in a limited fashion. I just ignore it and use the high setting when needed, which generates plenty of bright light, and has a long 17 hour burn time.

Pressing the white power switch repeatedly cycles through the modes and is dead simple to use  (although you can always take a photograph of the directions with your smartphone and refer if needed.) If the headlamp is on and you hold the power button down for 1 second, the turbo mode turns on. Pressing the power button when no action is taken for 3 seconds powers the light off.

To turn on the two auxiliary white LEDS with high color rendering capability, simply hold down the power button for 1 second, which displays them on a diffused flood light pattern. These are good for reading colored maps at night in your tent. Pressing the power button again turns them off.

The NU32 also has the requisite special modes, an SOS and beacon. These are entered and cycled by pressing the power button for three seconds when the light is off to repeatedly cycle through the modes and off.

The NU32 includes a micro-USB cord. To recharge the light, you pull back the small piece of plastic covering the micro-USB port and plug it into a power supply. There is a power indicator under the white light button that turns green when the light is fully charged. When the light is charging, it is red.

You can also test the power level of the battery when it is not charging. With the light off, press the power button once. If the power meter blinks 3 times, it means the battery is greater than 50% charged, 2 blinks represent a battery level below 50% and 1 blink means there’s less than 10% power left.

You can use the NU32 while it is charging, which is a nice capability to have in the tent at night or in camp if you run low and want to recharge while you cook dinner. It’s a fairly rare feature, so it’s a real score on such an inexpensive headlamp.

The Nu32 has a digital lock to prevent accidental activation. To lock the device you push both top buttons at once until the built-in power meter flashes. To unlock, push both buttons until the power meter flashes again. I consider digital or analog headlamps locks to be a must-have feature. The last thing you want is a dead headlamp because it turned on accidentally in your backpack.

The Nitecore NU32 is a great rechargeable headlamp for the money with easy-to-use control logic, a battery power indicator, digital lock, and white and red lighting modes. It has a high capacity 1800 mAh lithium-ion battery which has the equivalent power of 9AAA batteries, giving you a long burn time, even when using the headlamp on high (190 lumens for 17 hours). The lithium-ion rechargeable battery is also good for cold weather use because it won’t freeze. The combination of a spotlight and floodlight beams provides maximum versatility for nighttime activities, whether you’re on the move or in camp. The NU32 is also available in multiple colored cases and straps if that kind of thing is important to you. Besides the huge battery, I think my favorite feature of this headlamp is the two top control buttons, one for the white light and one for the red. They simplify the control logic compared to single button headlamps while providing excellent tactile and sound feedback each time they’re depressed.

Disclosure: Nitecore provided the author with a headlamp for this review.

SectionHiker is reader-supported. We independently research, test, and rate the best products. We only make money if you purchase a product through our affiliate links. Help us continue to test and write unsponsored and independent gear reviews, beginner FAQs, and free hiking guides.
Previous 10 Best Backpack Accessory Pockets of 2022
Next Platypus GravityWorks Water Filter (4L) Review