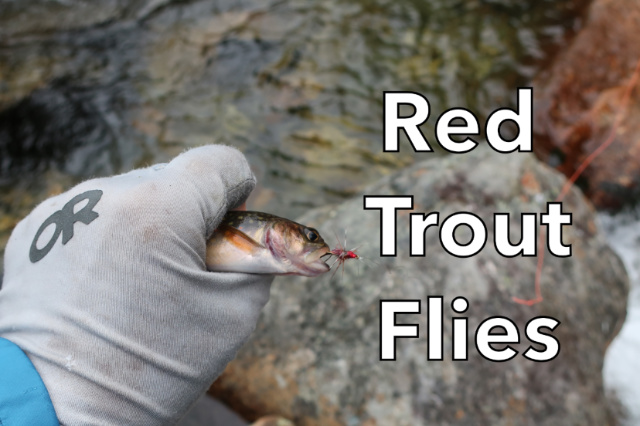 I’ve been doing a lot of Tenkara Fly Fishing this summer and I’ve made a point of exploring the small mountain streams I come across on my backpacking trips and peakbagging hikes. As a self-taught angler, I’m always experimenting and trying new things because that’s my preferred way to learn and master new skills.

One of my breakthroughs this summer has been the use of red-colored flies, including the Squirmy Wormy and an adaption of the Ausable Wulf, with the materials I have on hand. They’re both really simple to tie too.

I tie the Squirmy on a size 12 barbless hook while I tie the Ausable on a size 14 or 16. While most trout will hit a Squirmy, smaller fish are harder to hook with it because the body extends well beyond the hook and their mouths aren’t big enough to guarantee a good hook set. Whereas the Ausable is a much more compact fly so more hits become takes.

I’m not exactly sure what prompted me to try these two red flies this summer, although I can credit a few influences.

I tie my Squirmy Wormies with a Fulling Mill FM5050 dry fly hook #12, red tying thread, and Hareline Caster’s Squirmito Squiggly Worm Material. You have to be a little careful to avoid cutting the Squirmito with your thread when tying it with a pinch wrap  I also tie it with a bead sometimes or red hobby wire, to get it to sink. When fish strike this fly but spit it out or fail to get hooked, they’re probably too small to take a #12 hook. When that happens, I often switch to the Ausable in a smaller size.

Here’s a good video that illustrates the process of tying the Squirmy Wormy, along with a technique that can be used to avoid cutting the worm material, although I find it a bit cumbersome and unnecessary.

My Ausable Wulf is a cross between Jason’s Cheap Date Kebari and an Ausable Wulff (also called a Bomber) adapted with the materials I have at hand including red thread, ringneck pheasant tail fibers, Jameson’s Shetland Spindrift Paprika yarn, and grizzly hackle. I tie these on Fulling Mill’s 5050 Ultimate Dry Black Nickle Hooks in sizes #14 and #16. The yarn can become cumbersome on a #16, so I often just use the red thread to create a body instead. The trout don’t seem to notice the difference.

This fly will float on the surface or just below it and tends to draw immediate strikes when it hits the water or floats above a stationary trout. I haven’t really found a need to weigh it down for deeper water, because the mountain streams I fish are usually only a few feet deep.

If you haven’t tried red trout flies, give these a whirl. They’re great on a Tenkara rod, but I suspect they’ll produce with a more conventional rod-based setup as well.

Philip Werner has hiked and backpacked over 8500 miles in the United States and the UK and written over 3000 articles as the founder of SectionHiker.com, noted for its backpacking gear reviews and hiking FAQs. A devotee of New Hampshire and Maine hiking and backpacking, Philip has hiked all 650+ trails in the White Mountains twice and has completed 9 rounds of the 48 peaks on the White Mountains 4000 footer list with over 510 summits in all four seasons. He is also the author of Backpacking the White Mountain 4000 Footers, a free online guidebook of the best backpacking trips in the White Mountains in New Hampshire and Maine. He lives in New Hampshire. Click here to subscribe to the SectionHiker newsletter.
SectionHiker is reader-supported. We independently research, test, and rate the best products. We only make money if you purchase a product through our affiliate links. Help us continue to test and write unsponsored and independent gear reviews, beginner FAQs, and free hiking guides.
Previous Petzl Bindi Rechargeable Headlamp Review
Next An Oakes Gulf Loop Trip Plan: Backpacking the White Mountain 4000 Footers Guidebook