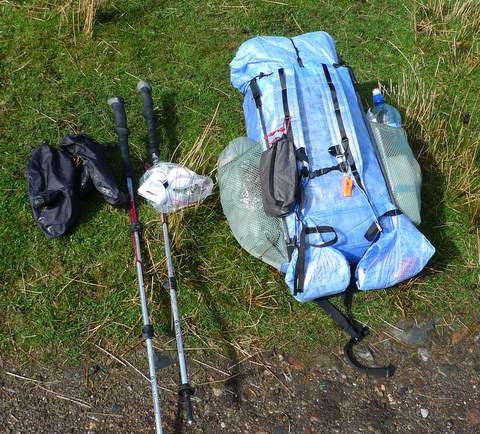 
I made some pretty big changes to my gear list for The Challenge this year, replacing leather boots with trail runners, swapping in an ultralight cuben fiber backpack, using chlorine dioxide tablets for water purification instead of a filter-based purifier, and carrying some new electronics.

All of these changes proved to be extremely successful across the Scottish terrain and I’ll be gradually working them into my core gear systems for hiking in New England.

There’s no doubt in my mind that the Inov-8 – Terocs were a major factor in making my hike a success: I didn’t get one blister during the entire Challenge!!. In fact, I may completely give up leather boots for 3 season hiking. The Terrocs proved to be fantastic for fording streams and rivers, drying within an hour after immersion on a warm day. Plus, I didn’t experience any foot discomfort given my past history with plantar fasciitis. I think I’m a convert.


Given the ITB problems I had last year in the 100 mile wilderness, I wasn’t going to take any chances on The Challenge and brought along two Pro-Tec Iliotibial Band Compression Straps which I wore coast-to-coast. They worked, but I could tell that I’d have had a problem if I hadn’t worn them all the time. The only issue I had with them was a heat rash that developed after a week of wear, but applying hydrocortisone cream to the affected areas reduced the irritation. 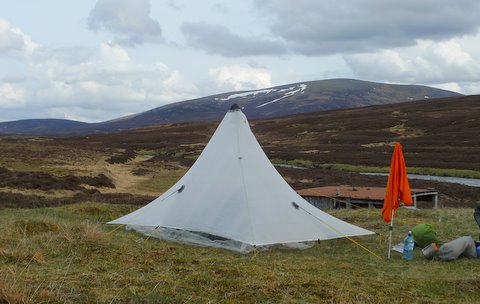 
My cuben fiber Duomid is well on it’s way to becoming my primary spring, fall, and winter shelter. It withstood the ever present Scottish wind without any stability issues and provided a dry, comfortable shelter under heavy rain. While I did experience some internal condensation on humid nights, it has so much interior room for 1 person, that it is easy to avoid touching the interior walls.

One thing I will probably change going forward are the stakes I use. The 8″ Easton stakes worked well for the base tie-outs (I used 6) and gave good grip in poor soil. However, I had some problems with the Easton caps coming off and I may move to a notched stake instead.

I’ll be doing a detailed review of the Duomid in a week or so. I got a lot of experience setting it up on different types of terrain and there are some tricks worth knowing to get a perfect pitch. Plus, there are some limitations with this shelter that are worth knowing about, especially in hot weather.


I’m very pleased with the special mods I had made to this bivy sack by Ron Bell at MLD, including the bug netting and extra length options. I did have bugs on a few nights and having enclosed the netting ensured a very comfortable nights sleep. While I experienced very mild internal condensation on the top of my sleeping bag on one or two nights, this was easily dried during breakfast before putting the sleeping bag into its stuff sack.

For storage, I kept my NeoAir sleeping pad in the bivy and rolled the two together. That proved to be a good way to eliminate an extra stuff sack and made it easy to set my sleeping arrangements each night. My friend Quoddy suggested this.


I switched from a 14 oz. regular size Thermarest Neoair Sleeping Pad to a 9 oz short-sized one  just before leaving for Scotland in order to shave some more weight from my pack. Unfortunately, this had some unexpected consequences which I’d rather not repeat.

As a side sleeper, my knees were unsupported at night because the pad only reached to the top of my thighs. This resulted in some knee pain because my knees were suspended out beyond the bottom of the pad without support. I mitigated this by stuffing all of my extra clothing each night under my legs in my bivy sack, but it wasn’t optimal. From now on, I’ll use the full length pad.


I didn’t use a filter-based water purification system on The Challenge, opting instead to use Katadyn Micropur chlorine dioxide tablets. Some would argue that the water in Scotland is so pure that no filtration or purification is necessary, but I wasn’t taking any chances. Using chemicals like this was a big departure for me, but it provided a significant weight reduction, and waiting 30 minutes for the chemicals to react didn’t prove as inconvenient as I imagined it would be.

I also didn’t use a reservoir and hose system, using a recycled one liter water bottle (bought at the Dublin airport) instead. Remaining hydrated during the day without a hose proved to be less of a concern than I’d feared. I simply made a point to finish a liter of water every two hours.This worked very well for Scotland because there are so many streams and rivers along the way, that there is no need to carry more than one liter at time. I used a 2 liter reservoir in camp simply for convenience.

I’ll have to see how well carrying less water works in the eastern US, but I am encouraged by this experience. 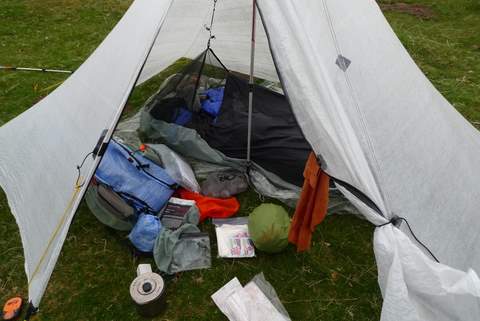 
I’m pretty sure that I was the only person on The Challenge this year with a 10 oz cuben fiber backpack. It certainly was a great conversation starter. The Zpacks Blast provided ample room for my gear and food and the side mesh pockets were, as always, invaluable for holding maps, my water bottle, Duomid and other odds and ends. That said, I payed very close attention to gear volume on this hike in order to use a lower capacity pack.

Given the damp conditions on The Challenge, I was glad that I’d seam sealed the base of the Blast to prevent moisture from leaking in on wet ground, but the fact that the cuben fiber is waterproof, meant no pack cover was needed in the rain.

The only complaint I have about the Blast are the shoulder straps, which proved a bit to narrow for a 20 lb load out including food and fuel. This wasn’t a problem when I’d eaten my pack weight down, but I did experience some discomfort after several high mileage days in a row when I was carrying a lot of food.


I used a SPOT on this hike to keep my wife and Challenge Control appraised of my health and location, sending an OK message every morning and evening during breakfast and dinner. This system worked well except for a 2 day window when I apparently entered a blind spot in the SPOT’s satellite coverage.

Despite that glitch, I liked the fact that the SPOT is only an outbound communication channel because it provided me with more privacy than a cell phone. I hate phones because they always interrupt something and I avoid turning them on during hikes for that reason. I’ll be doing a more detailed review soon. Overall this is a useful device, but the packaging and web interface could stand a lot of improvement.


I’m not a big fan of electronic navigation, so it was a big departure from the norm for me to bring a refurbished Garmin Geko 301 GPS on my trip. This model is brilliant because it can display the OS grid coordinates needed for reading UK hiking maps.

I used it in the most minimal way imaginable, to get an occasional position fix, and to record the location of good future camp sites.

The Geko proved to be a very worthwhile 3 oz and I’ll bring it on future long distances hikes that don’t run along well defined trail corridors and for bushwhacking back home. 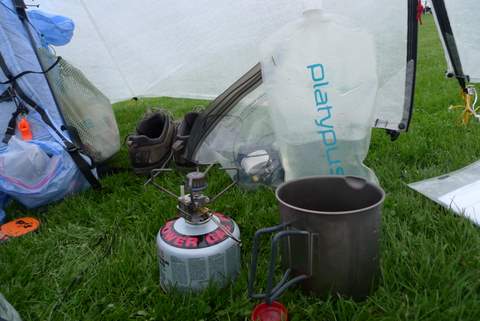 
I brought a bunch of crap along that I just didn’t need and which added some unnecessary weight to my kit. Chock these up to lessons learned.