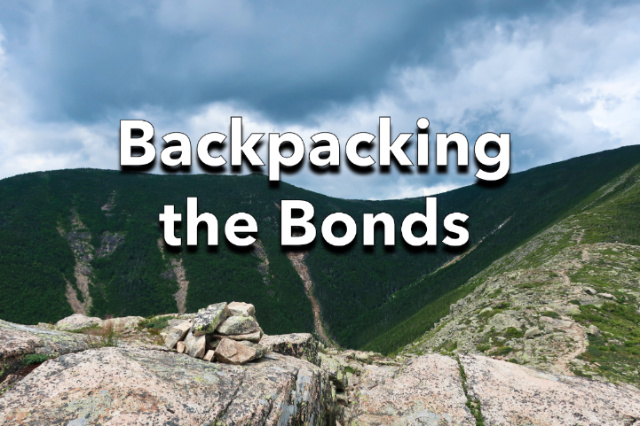 The Bonds – Bondcliff, Mt Bond, and West Bond are three of the most scenic 4000 footers in the White Mountains, a place with no shortage of mountaintop views. They’re eleven miles from the nearest trailhead, smack in the middle of the Pemigewasset Wilderness, so it’s a full day walk to climb them for most backpackers, although it is possible to do an out and back in a day or visit them along a one-day Pemigewasset Loop.

I headed there for a one-night out and back because I hadn’t been out there for a few years and to check off a few more peaks on the White Mountains 4000 Footer Grid. I once avoided revisiting mountains and places I’ve hiked previously, but I’ve become more comfortable with the idea in recent years because these new experiences help me to recall and hold onto past glories and, in hindsight, my humorous mistakes.

This being July, I knew I’d probably encounter a lot of other hikers and backpackers since the Bonds are part of a Pemigewasset Loop, one of the more popular backpacks, and now trail runs, of the White Mountains. I don’t think I realized just how many people I would encounter on a weekday with rain in the forecast, although I know it’s less than last year (during the first year of the Covid Pandemic) when it felt like everyone in the Northeastern United States came to the White Mountains for their summer vacation.

I got an early start on a Thursday morning, coming in from the south along the Lincoln Woods Trail and the Bondcliff Trail. The first half of the hike went very fast because it’s essentially flat on an old railway bed along the bank of the East Pemigewasset River. You can still see and feel the old railroad ties underfoot.

Then came the climb to Bondcliff, the southernmost peak of the Bond group. The trail runs next to Black Brook, crossing the brook several times and providing an opportunity to refill your water bottles or reservoir so you don’t have to carry all of your water to the summits, which are dry.

It had rained quite heavily in recent days and there was an abundance of water in Black Brook including water running down the trail. This is a far cry from the last time I’d hiked this route several years previously when there was a drought, and I had to beg water from some hikers I met on Bondcliff because I’d run out.

Bondcliff is called the “Cliffs of Bond” on older maps (which is one way to assess their currency) is an open ridge with a graceful curving profile. The highpoint has a crag that juts out above a deep valley called Hellgate. It’s a very popular place to have a photo taken and I finally got one of myself there on the hike back.

The hike up to Bondcliff wasn’t too bad, but it was quite windy and cool on the ridge, so I layered up with a fleece hoody for the traverse. Once past Bondcliff there is a steep and quite exposed ascent up the side of Mt Bond which I’d conveniently forgotten about, that slowed my pace. On the horizon, there were tall dark clouds forming, a sign of rain or thunderstorms. I reached the protection of the krummholz below the summit just as it started to rain, but it had already stopped by the time I reached the summit cairn.

I continued over Bond to the West Bond Spur, the third of the Bond peaks, before hiking the half-mile out to the summit. From there, I took in the view of Bondcliff, Owlshead Mountain, Garfield, Franconia Ridge. West Bond, Mt Carrigain, and the Hancocks. West Bond is a central vantage point for the Pemigewasset Wilderness with unsurpassed views. It’s really a special place to watch the sunrise or sunset.

As I stood on the summit, I could see a rain squall on Franconia Ridge racing over Owlshead and headed my way. It was moving very fast and reached me before I could get below the treeline, just a short distance away. But once again, the rain passed overhead very quickly saving me a drenching.

Having summitted the three Bonds, it was time to start thinking about water and a campsite. I hiked down the Guyot Campsite run by the AMC on the east side of Mt Bond and was greeted by a mob scene. The campsite has tent platforms nestled on the hillside with a good spring, which is the only water source for miles. When I arrived, around 3:30 pm, all of the platforms had been taken (first come first served) and there were people wandering all around filtering water and looking for a place to pitch their tents.

I’d brought a tarp on this trip because I’d hoped to camp a few miles beyond Guyot and continue along a bigger loop, but with thunderheads on the horizon, I didn’t relish hiking the next above-treeline segment and wanted to wait until the next day. That same morning, I’d published an article on SectionHiker.com about how to read clouds to predict the weather and you didn’t need to be an expert to predict what the thunderheads above were going to do.

I chatted with the campsite Caretaker and we discussed my tarp, which is a really undesirable shelter to have for camping on a wooden platform because it takes us so much space. When Guyot is full, which occurs frequently in summer, they pack two tents on platforms intended for one, and four tents on platforms intended for two. I’m surprised the AMC and the Forest Service haven’t instituted a reservation system for the Guyot Campsite yet like they have at other popular locations.

When Guyot is full, it’s customary for the caretaker to direct campers to a dispersed tent site at the top of the Guyot Campsite Spur Trail and I asked if it would be ok to camp there instead. This was just a formality since the entire Bondcliff Trail from Lincoln Woods to Mt Guyot has been completely overrun by dozens of illegal campsites (yeah – it’s a problem no one with any authority wants to address) but I wanted to acknowledge that I understood the ramifications of my request.

So I humped 5 liters of water up back up the Campsite Spur to avoid having to go back down again in the morning and grabbed the only individual site up top that had any privacy. The rest of the dispersed site was jam-packed with more tents by dinner. Judging by the grumbling the next day, I may have been the only person on that mountain who got any sleep that night.

The next morning I cooked a hot breakfast while I packed up. My inflatable sleeping pad had burst overnight, which I only discovered at 5:30 am, so I decided to cut short my intended trip. I’d planned to hike a much longer 2-night/3 day loop in order to bag a few more peaks and fish Franconia Brook, but decided to hike out the way I’d come in. It was a deflating decision (yuk yuk), but prudent, as I didn’t relish another night without a sleeping pad in potentially dodgy weather.

Backpacking The Bonds and Back

I climbed back up Mt Bond and down to Bondcliff again, hiking the 11 miles back out, pausing at Franconia Brook and along the East Pemigewasset to fish for trout. It rained some more on my way out, which I’d been expecting, but I’d come prepared with good rain gear. This wasn’t the trip I’d been anticipating, but hiking out to the Bonds is always rewarding and I met some great people along the way. I plan to come back in August along a different route, which will make up for the adventure I missed this time. And next time, I’ll either bring a hammock or a foam sleeping pad!

Philip Werner has hiked and backpacked over 7500 miles in the United States and the UK and written over 2500 articles as the founder of SectionHiker.com, noted for its backpacking gear reviews and hiking FAQs. A devotee of New Hampshire and Maine hiking and backpacking, Philip is the 36th person to hike all 650 of the hiking trails in the White Mountain Guide, a distance of approximately 2500 miles, completing a second round in 2021. Philip is the author of Backpacking the White Mountain 4000 Footers, a free online guidebook of the best backpacking trips in the White Mountains in New Hampshire and Maine. He lives in New Hampshire.
Editor's note: If you’re thinking about buying gear that we’ve reviewed or recommend on SectionHiker, you can help support us in the process. Just click on any of the seller links above, and if you make a purchase, we may (but not always) receive a small percentage of the transaction. The cost of the product is the same to you but this helps us continue to test and write unsponsored and independent gear reviews, beginner FAQs, and free hiking guides. Thanks and we appreciate your support!
Previous Hiking Above Treeline
Next How to Avoid Thunderstorms While Hiking and Backpacking