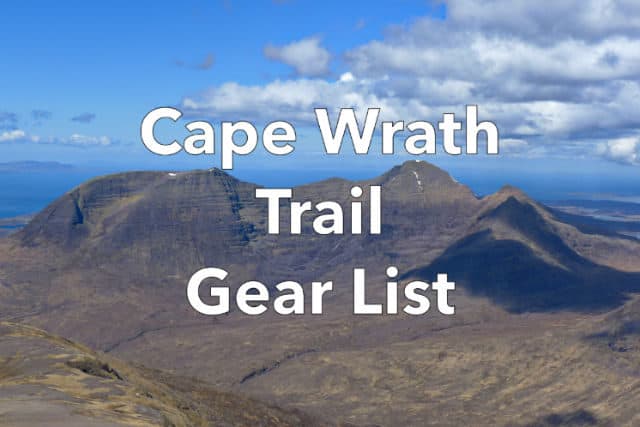 The Cape Wrath Trail travels up the west coast of Scotland, beginning in Fort William, and ending at Cape Wrath which is the northernmost point of Britain. It’s not actually a trail though, but a route. What’s the difference? You can connect the two endpoints by hiking over any trails you want, even hiking cross-country or a mix, if it suits you. Which is basically my plan. For more details, see my post, Section Hiking the Cape Wrath Trail.

Backpacking in Scotland 101: The quick and dirty

I always like to motivate my gear lists with a summary of the conditions I expect to encounter. It’s the key to packing properly, particularly when you’re backpacking someplace you’ve never visited or seldom travel to. So here’s what you need to know. This is highly summarized.

This gear list is very similar to the gear lists I’ve brought on my previous backpacking trips in Scotland. It comes out at 15.5 lbs, which is a perfectly comfortable weight for me to carry. With up to 6 days of food, it will never exceed 28 pounds.

There are a couple of differences worth noting compared to my 2013 TGO Challenge Gear list. I’m bringing a tent with a floor on this trip not a floorless mid, a more comfortable sleeping pad/pillow combination, a camping towel for washing up, two wool shirts instead of synthetic ones, and an extra pair of socks and underwear. There’s no doubt I could drop some of these to save a half pound of gear weight, but I’m not inclined to on this trip. In fact, I wish I’d had them on my last coast-to-coast hike in 2013. Trying to find replacement socks in small towns in Scotland is a nightmare!

I wrestled with which backpack to bring on this trip and in the end decided to bring my trusty Hyperlite Mountain Gear Southwest 3400 (55L), mainly because it’s a waterproof pack and has removable frames stays, which makes it easier to travel with by plane. It also has decent external storage for carrying wet gear.

The largest and heaviest load I’ll have to carry will be coming out of Fort William at the start of my trip, when I’ll be carrying 6 days of food will be 28 pounds. That’s easily managed by the 3400, which can be compressed as I eat through my food. Water is so abundant, that you seldom need to carry much.

I’m bringing a Hyperlite Mountain Gear Dirigo 2 Tent, which is a two-person single wall tent. Weighing less than 2 lbs, it’s a spacious, pyramid-shaped DCF shelter that provides me with a lot of living space if I need to sit out bad weather or cook under cover. It’s pitched with two trekking poles. I’d originally planned to bring a new Tarptent Stratospire 1, but I never got around to seam sealing it or using it with the terrible autumn and winter we’ve had. While the Dirigo is a single wall shelter prone to internal condensation, that kind of thing has never phased me. I also have a small towel.

Having backpacked in Scotland in May previously (in the 2010 and 2013 TGO Challenge), I have a good idea about what works for sleeping insulation. I’m bringing a 20-degree Feathered Friends Tanager bag for those days when I’ve been hiking all day in cold rain and want some warmth. I plan to sleep in some mountain bothies along my route and decided I wanted a sleeping pad with a thicker exterior shell fabric, like the Sea-2-Summit Etherlight Insulated XT. It’s so much more comfortable than my NeoAir Xlite, that I figured I could afford the extra 3 oz difference in weight. I’m also bringing a cut-down Gossamer Gear Thinlight pad to lay under it. The Thinlight prevents inflatable pads from slipping on slick tent floors (DCF or silnylon). Plus I can use it as a sit pad to keep my butt dry on coffee breaks.

The office is the brains of this operation and encompasses navigation, communications, photography, lighting, and power. I’m a map and compass person at heart, so I plan to rely on them primarily. Still, it’s nice to have Smartphone apps with GPS-encoded maps, so I can check my position and view maps on the phone that I don’t want to carry. It’s hard to believe how good the maps in navigation apps have gotten in the past 5 years, to the point where you really could navigate entirely by them if you could count on having power for your phone and not having it break or malfunction.

I carry a Garmin inReach Explorer+, so my mother and wife can track my progress on an online map, which they enjoy doing on my longer hikes. I also like the keyboard functions on the Explorer+ more than the ones on the inReach Mini, and the fact that I don’t have to slave my phone to it via Bluetooth for better ease of use. I mainly send my wife preset messages, but having the ability to communicate with ad hoc typed messages can be helpful. I’ll probably also pick up a local sim card for my iPhone, but will usually just check email when I can get free WiFi. This is a vacation after all. I want to get away from the Internet for a while.

Photography: the Canon GX9 Mk II is a very compact, USB rechargeable camera with a big sensor that’s good for low light conditions. I unified my electronics to all be USB or Lightning rechargeable last year. Lighting: You actually don’t need much lighting in Scotland, because the days are so long. But a headlamp is a good aid in a dark bothy. Power: It’s just a good idea to carry a power pack and recharge it when you come across a power outlet.

I’ll be bringing an MSR WindBurner which is windproof and fuel-efficient. The Windburner is a self-contained canister stove system that is impervious to the wind because it has a radiant burner that cooks without a flame. It’s also fairly safe to use in a tent since it doesn’t create a fireball when lit, provided that you have excellent ventilation to prevent carbon monoxide poisoning.

Scotland has a reputation as having clean water, but I’ve always filtered mine. Face it. Most of the countryside is given over to raising livestock, be it deer, cows, or sheep. Plus, I’ve seen dead deer in streams, killed by the winter, so I’d just assume filter the water I drink from them. Hence, my Sawyer Squeeze Water Filter. I’ll be using it with an Evernew 2L bottle which has a gusseted bottom, so it stands up by itself. It also has a cap that’s permanently attached to the bottle so you can’t lose it. I’ll probably pick up a 1L bottle, as well, when I food shop in Fort William, and filter water into it.

Think wind, rain. some snow up high, and hypothermia conditions. I’ve also packed in a little redundancy, like an extra pair of socks and underwear, since I’ve learned the hard way that these are very difficult to replace if you blow them out in the remote part of Scotland. The rest of my clothes are a pretty standard load for hiking in wet and windy mountainous terrain, like the Appalachian Trail or New England, with lots of thin layers which can be combined in different ways.

The only exception to this is the Hanz Waterproof socks I plan to bring. The ridgeline hikes I have planned are bound to have some lingering snow high up. Hiking in wet snow while wearing trail runners at elevation is unpleasant, but these socks are insulated, in addition to being waterproof. They also fit into my trail runners, so I plan to wear them to keep my feet warm on the tops and down below if my wet feet get chilled.

My first aid kits have always been self-assembled and pretty minimal. I put the most effort into blister prevention and treatment, using Leukotape to prevent hotspots when I feel I need the,, and long-lasting, padded, Band-aid Hydro-seal bandages if I get blisters. These are super sticky bandages that don’t come off for days and help heal the wound. They’re the same thing as Compeed bandages, sold in the UK, but much less expensive.

The key to foot health is hike year-round so your feet stay “hard” and letting them dry out at night. I guess I’ve been lucky to avoid most other complications. In addition to foot care, I carry the usual anti-histamines, pain relievers, and anti-diarrhea pills.

Lyme disease is a growing concern in Scotland, which has a huge deer population because they’re cultivated for venison. I’ll be wearing pants, socks, and a hat that have been treated with Insect Shield (Permethrin), which is an insecticide that kills ticks and other insects on contact. I’ve been wearing clothing like this for going on 10 years and stayed Lyme-free throughout.

It’s also worth explaining my footwear selection. Scotland is so wet and you have to ford so many streams and rivers, that many hikers wear mesh trail runners because they drain quickly and provide good traction. I don’t even bother to take my shoes off in Scotland when I have to ford a stream: I just walk right through. The downside of this is that the stream grit is highly abrasive to socks. But wearing Darn Tough socks is a good way to mitigate the issue because they’re so thick and durable, and can stand up to really extreme abuse.

I’ve backpacked twice across Scotland previously and spent a considerable amount of time in the country, so I know the ropes, although it wouldn’t be an adventure if there weren’t unexpected surprises. Still, I hope you’ve found this annotated gear list walkthrough useful if you plan to hike the Cape Wrath Trail or another route in Scotland. You may also find some of my previous articles on the topic helpful:

SectionHiker is reader-supported. We independently research, test, and rate the best products. We only make money if you purchase a product through our affiliate links. Help us continue to test and write unsponsored and independent gear reviews, beginner FAQs, and free hiking guides.
Previous Section Hiking the Cape Wrath Trail
Next MSR Carbon Reflex 1 Ultralight Tent Review

ENLIGHTENED-EQUIPMENT: 20% off Sitewide. Now through Nov 30! No code needed.