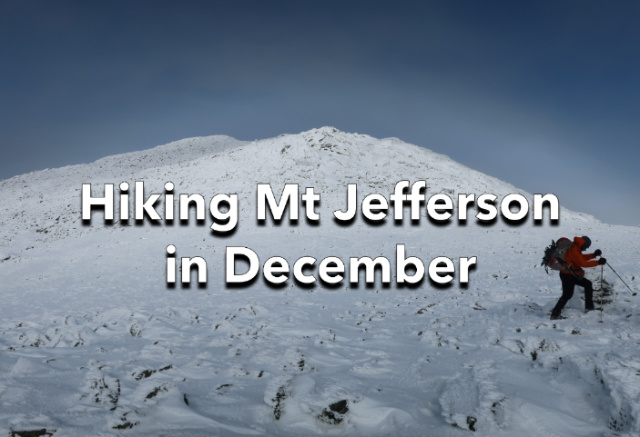 Mt Jefferson (5712′) is the third-highest White Mountain 4000 footer and one of the hardest mountains to climb in winter because it’s so windy. The best approach in winter is to climb the Jewell Trail to the Gulfside Trail and then up the Jefferson Loop Trail, but once you pop above treeline on the Jewell at mile 3.0 (approx 4500′), you are totally exposed to the elements for 2.5 miles until you reach the summit of Jefferson.

Once you get above treeline, the terrain looks like you’re on the surface of the moon, and depending on trail conditions, if you can even find the trail, and you might need to wear crampons or snowshoes to cover the distance. Depending on the wind, this can also require hiking with full face protection and a ski mask, which can be unpleasant if it fogs up to you. If there’s any consolation, you’ll have your back to the wind on the way down, since the prevailing winds are usually from the northwest.

My hiking partners, Ken, Karen, and I have been itching to climb Jefferson for the past two months, but the wind forecasts have been too high for our liking in the northern Presidentials. This isn’t a hike that I’ll do solo in winter conditions, which last from November into April or May. I usually draw the line at wind speeds of 40-45 mph in winter, which will knock you down. Windchill is also a concern, but you’ll be ok if you cover every part of your exposed skin with clothing and protective gear.

The tricky part in planning a hike is getting a decent wind forecast for Jefferson. The nearest weather forecast is for Mt Washington (the higher summits forecast from the Mt Washington Observatory) which is 500′ higher in elevation, so you need to discount their wind speed forecast a bit for Jefferson. NOAA (weather.gov) also tends to overestimate wind speeds a bit (my friends call it the doom and gloom forecast), but it’s a good website if you like to read detailed technical forecasts and track weather trends. I’ve found that tracking weather trends and fronts over a period of several days is the best way to develop your amateur mountain weather forecasting skills. The physical act of climbing the mountain is a lot less time-consuming than predicting a safe day to go (See Winter Weather Forecasting in Mountainous Terrain.)

The NOAA Weather Forcast the Mt Jefferson summit for Wednesday, Dec 29 was “Mostly sunny, with a high near 24. Wind chill values as low as -3. Blustery, with a west wind 15 to 25 mph.”

The Higher Summits Forecast for Mt Washington on Wednesday was “In and out of the clouds under partly sunny skies. High: Low 20s, Wind: W at 15-30 mph, and Wind Chill: 5 below to 5 above rising to 5 to 15 above”

Translated: These were incredibly warm and calm conditions for a Northern Presidential hike up to Jefferson.

The local hiker beta on NewEnglandTrailConditions.com described the Jewell Trail as being packed out, so we wore Hillsound Trail Crampons. There aren’t a lot of really steep sections on this route, so we didn’t need full crampons. We also carried up snowshoes, because the last thing you want to do is to climb 3000′ up the Jewell and discover you need them. Still, the added 5 lbs of snowshoes is quite noticeable.

We parked at the Cog’s Hiker Parking Lot, which costs $10/person (not per car). While this is a total ripoff, it saves about one mile at the beginning and end of the hike, which you’ll appreciate at the end of a long day. We walked up to the Jewell Spur Trail, where the river crossing was bridged by very solid ice and hiked to the Jewell Junction. I used to maintain the Jewell Spur Trail for the USFS, many years ago as a volunteer.

The Jewell had about one inch of fresh snow, but we got a good bite with our Hillsounds. While there were a few spots between the Jewell and Jefferson on the Gulfside trail where you could have used snowshoes, they were quite short, so we just plowed through them. I other words, the snowshoes went along for the ride.

I love hiking up the Jewell Trail because it’s a nice, relatively gradual way to get above treeline. It runs along a long graceful ridgeline, popping out above treeline at about 4500′. From there, it’s about another 1000′ up to the Gulfside Trail junction.

We had a hard time actually finding the upper 500′ or so of the Jewell because the small cairns that mark the path were covered in rime ice and were difficult to pick out. But we eventually found our way after stumbling around a bit. My partners, Ken and Karen, have been also up this way many times so we had a pretty good idea where the trail was supposed to be. :-)

Once on the Gulfside Trail, which runs along the west flank of Mt Clay (5533′), we hiked toward Jefferson, dropping into the Clay/Jefferson col before climbing up to the Jefferson Loop Trail. That trail climbs to the summit of Jefferson and is fully exposed.

The wind was blowing in from the west, so Karen and I pulled on buffs to cover the side of our face exposed to the wind. But the wind speed was pretty mellow (probably between 10-20 mph) and the temperatures relatively high, so I wasn’t that worried about frostbite. Still, I poked my face and nose periodically to make sure they were still warm to the touch.

When we reached the summit mound, it blocked the wind completely. We dropped our packs and clambered the 20′ up to the mountain summit, before descending and having a bite to eat and layering up a bit.

The hike back wasn’t bad, all things considered. Before you can reach the Jewell Trail junction, you have to reclimb most of the way up Clay again on the Gulfside Trail. Still, I was feeling pretty good, even with just a day of rest after climbing the Osceolas earlier in the week.

It’s taken a while for me to get back into fighting shape for climbing 4000 footers for the White Mountain 4000 footer grid. But after climbing one hundred and two 4000 footers this calendar year and ninety in the past six months, I’m made a lot of progress. I’m now at 360/576 (62.5%) and looking forward to the coming year to make more headway on my outstanding peaks.

This is the last time I’m going to climb Mt Jefferson this year, but we hope to get back to it in January and February if we can get a decent weather window.

SectionHiker is reader-supported. We independently research, test, and rate the best products. We only make money if you purchase a product through our affiliate links. Help us continue to test and write unsponsored and independent gear reviews, beginner FAQs, and free hiking guides.
Previous NEMO Kodiak 2P Tent Review
Next MSR Snowshoe Guide: How to Choose