It was time to get back to hiking in my own back yard, so I took last Friday off and had myself a quick two day hike in the White Mountains, bagging 3 more peaks on the White Mountain 4,000 footer list. This was a big walk over 34 miles of very rugged and remote country through the heart of the Pemigewasset Wilderness.

The weather was very hot in the high 80’s, but a high had moved into the region guaranteeing a few days without rain. Since returning from Scotland, our weather has been atrocious, with tornadoes, horizontal rain, thunderstorm cells, and wind shear. Not the stuff to be out and about in above treeline.

My plan was to pick off the Bonds on Day 1 and then loop back over Mt. Guyot (4,580 ft), South Twin (4,902 ft) and past Galehead Hut to climb Owl’s Head (4,025 ft), on the way back to the Lincoln Woods trail head. Unfortunately, a few hours of unexpected bushwhacking on the return segment knackered me, so I left that final ascent for another day. Despite the longer days we’ve been havng, getting back to the car before nightfall would have been chancy. 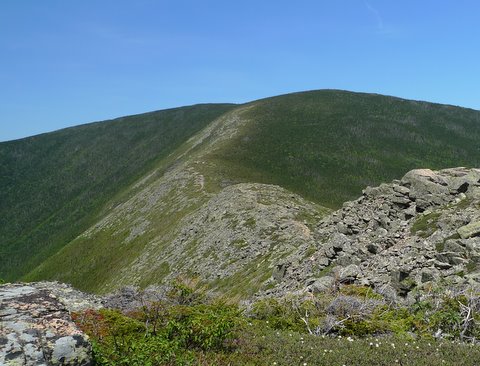 As usual, I left home at 5:00 am on Friday morning to beat traffic and arrived at the Lincoln Woods trail head at 7:30, just a two and a half hour drive from my house. Living so close to the White Mountains is a real gift.

From my car, I walked 5 miles up the Lincoln Woods Trail and then another 2-ish miles along the Wilderness Trail to get to the base of Bondcliff Trail and the  middle of nowhere. These trails follow old railroad rights of way built when the Whites were clear cut for timber, and the railroad ties and spikes still remain in the treadway, slowly rotting away.

I was making great time and hardly saw a soul along the way, the benefit of coming a day before the weekend. After Scotland, it was nice to be in heavy woods again despite the black flies and mosquitoes.

I turned at the Bondcliff Trail head and started the 800 meter ascent, the ground cover quickly changing from leaf cover to the typical knee grinding rock and roots that characterize the trails of the Whites.

In addition to walking, I was doing a little gear system testing to make sure I felt confident with the gear changes I made for Scotland, here in the Whites. These included switching from leather boots to Inov-8 TerRoc 330 trail runners

and using Micropur chlorine dioxide tablets as my primary water purification method, instead of a filter or mechanical purifier. 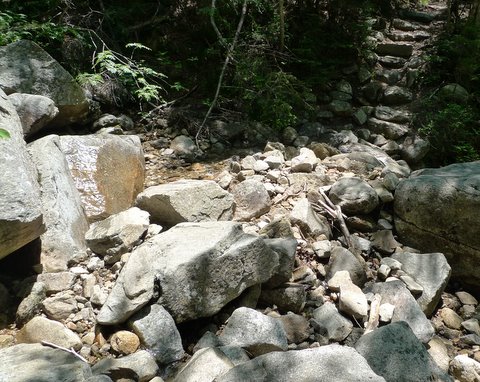 
I was also experimenting with carrying less water during the day, trying to get by with 1 quart instead of 3. Dropping 4 pounds of weight like this (2 lbs per quart) makes a big difference when you’re carrying a 15 pound pack. In the past, I’ve used a reservoir and hose system to regulate my water intake, but on this hike, I was just using a 1 liter recycled water bottle and making a point to empty it and refill at every water crossing I came to.

My objective for day 1 was to summit Bondcliff, Mt Bond and West Bond before descending to the Guyot Campsite for water, with a dry camp along the Twinway on a short section of the Appalachian Trail between Mt Guyot and South Twin. This plan had to potential to fail:. South Twin is close to 5,000 feet and I didn’t know if I’d have sufficient wind cover for the night.  However, I knew I could continue a few miles past it and camp down near the more protected Galehead Hut, if required.

Unfortunately, I ran out of water and water sources after climbing Mt. Bond and and had to walk past the trail junction to West Bond, resupply at the Guyot campsite spring, and then retrace my steps to West Bond to bag the peak. It was completely worth it though: the views from West Bond are fantastic and it’s a short climb.

The Guyot Campsite is on the northwestern side of Mt. Bond, just before you come the boulder field at the base of Mt. Guyot. It’s a steep two tenths of a mile down to the tentsite and it’s platforms, but it’s got the only freshwater around. When I arrived, I boiled some water to make a cup of tea, filled my 1 liter bottle and an additional 3 liter platypus for a dry camp.

Next, I backtracked to the trail head with West Bond and walked down the wooded ridge to the rocky summit.

Daylight was waning, so I didn’t linger, and headed back toward the Twinway to find a good camp site for the night. Stealth or wild camping is one of the aspects of backpacking that I like the most because it requires spontaneity, good judgment, and a bit of luck. Picking a comfortable high elevation place to camp is a skill and you can be quite miserable if you don’t reason things out carefully.

I wasn’t exactly sure what kind of site I’d find along the Twinway, but I knew that it would probably be a densely forested location close to treeline. Accordingly, I’d brought the smallest tarp I own, a 8 x 8 foot JRB sylnylon tarp in a stealthy green color. I also brought my Ursack, because I needed a bear bag but didn’t want to be bothered with hanging a bag so close to dark.

This section of the Twinway is very rough and the sides of the ridge drop precipitively down either side of the trail. The area is also densely wooded with a covering a spagnum moss and quite exposed to the westerly wind, as it blows along the north shoulder of the mountain.

Eventually, I found a decent pitch on the northeast side of the trail,that was also reasonably protected from the wind. While not technically legal – It wasn’t 200 ft from the the trail – I was beyond caring and started setting up camp. I am a very low impact camper, and the site had obviously been used before by others.

I pitched my tarp so as to block most of the westerly breeze if it picked up during the night, cooked some ramen noodles and miso soup, and crashed before 8 PM. I was zonked.


I woke up at 4:40 am the next morning and was packed and on my way b y 6 AM. I climbed 10 minutes to the summit of South Twin and took in the great views. I’ve climbed this mountain every season of the year and it is a  magnificent sentinel over the northern perimeter of the Pemigewasset.

I lingered a few minutes, taking in the early light and views, before climbing down the steep western face to Galehead hut.This descent is always a little tricky because it’s a narrow ribbon of large boulders all jumbled together and hemmed in by dense krumholz. The  boulders are wet and slick with spring water except in winter when it turns into an icy coating.

Galehead Hut is close to the base of South Twin, so I stopped in to refresh my water at the public tap. They had opened for the season but very few people had stayed over Friday night.

After topping off, I got on the Twin Brook Trail and followed it through birch forest around the base of Galehead mountain to Franconia Brook and 13 Falls campsite. There is a magnificent sequence of waterfalls just past the campsite and well worth the walk down, even if you don’t continue to Owl’s Head.

At 13 Falls, the trail turns right and heads northwest up Franconia Brook. However, itt’s easy to lose the trail at this point. Don’t cross to the other side of the brook, but stop halfway, and turn right paralleling the waterfalls. Cross to the west bank, only when you come to a sign for the Lincoln Brook Trail. But beware.

Beware of the fact that the Lincoln Brook trail is very poorly maintained from 13 falls to the base of Owl’s Head, with an lot of dead trees blocking the path. There is so much wood on the trail here that I wondered whether the trail had been purposely closed.

Eventually, the trail runs into the headwaters of Lincoln Brook. After that, it completely disappears.

I’m very good at reading poorly maintained trail and damned if I could find any evidence of one. This meant that I had to bushwhack to the base of Owl’s Head, about 1.5 miles south. The woods were very dense, so I decided to walk down Lincoln Brook itself to make some headway.This became rapidly problematic because the water in the brook is very cold and the brook is clogged periodically with log jams and dead brush.

Eventually I had to leave the stream when it got too big, and just bushwhack. I got turned around in a bog and had to get my map and compass out to get a bearing so I could continue south. When I got headed in the right direction again, I kept trying to find the trail marked on the east side of the brook, but still could not find it.

I hadn’t really been prepared for bushwhacking and my arms got pretty scratched up as I made my may alongside the brook, ranging up and down the west side of Owl’s Head looking for a trail. I eventually found one about 200 yards north of the side trail that climbs the Owl’s Head summit.

Anyway to make a long story short, I ended up deciding to hike the 8 miles out to my car instead of climbing Owl’s Head because I was afraid of running out of daylight to do both. Owl’s Head is a straightforward day hike and will be easy to bag some other weekend.  I had had a great trip over the Bonds already and was satisfied with my weekend outing.

From the base of Owl’s Head, I continued south along the Lincoln Brook Trail, bushwhacking another 2 miles, starting where Lincoln Brook and Franconia Brook intersect and coming out at Franconia Falls (above), From there, it was a fast four mile walk back to my car.

While the bushwhacking segment of this trip was unplanned, it wasn’t altogether unpleasant. It was hard, but it’s something I’d planned to do more of later in the summer. I’m interested in climbing the trailless peaks in the Whites and the Catskills. However next time I go bushwhacking, I’ll probably bring a brawny partner with a bit more experience than me to mitigate the risk. The remote sections of the White Mountains can be really hard to penetrate and I’d rather do them with a partner than solo.