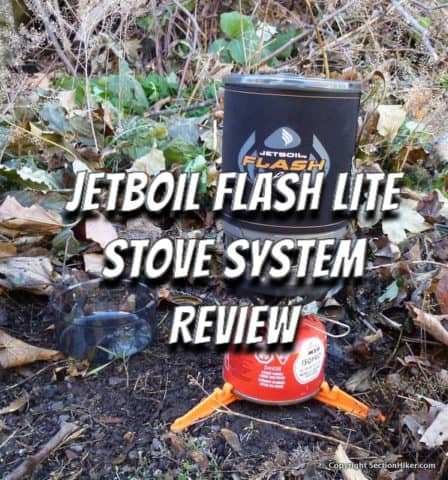 The Jetboil FlashLite Personal Cook System is the lightest weight Jetboil cook system available today, weighing 12.3 ounces (10 oz. minimum). It’s basically the same as the 1.0 Jetboil Flash Personal Cook System but with a smaller volume and lighter weight 0.8L pot. Designed for non-winter use, it’s ideal for rapidly boiling water to make things like coffee, soup, pasta, or rehydrating freeze-dried backpacking meals. You can further reduce the weight of the system to 10 ounces by leaving the included pot stabilizer and plastic cup home and just eating and drinking out of the pot. If all you need to do is to boil water, the Flash Lite will work admirably for your needs.

Jetboil has replaced the Flash Lite Stove with the Jetboil Flash, which is virtually identical but has a larger pot. Read our Jetboil Stove Buyers Guide which goes into detail about the differences between all of Jetboil’s stove systems.

The Jetboil Flash Lite isn’t just a backpacking stove, but a complete cooking system, an important distinction when comparing backpacking stoves to one another. It consists of the following components:

When you buy a Jetboil, you’re paying for the convenience of an integrated unit that’s easy to pack and fairly idiot-proof to use, which can be a good thing. The components themselves work well together and well enough for their intended purpose, but I wouldn’t call them best of breed. While you can assemble your own cook system from scratch using better or lighter weight components, it’s hard to beat the convenience and degree of integration provided by Jetboil’s stove systems.

The stove provided with the Jetboil Flash Lite is fairly unremarkable as backpacking stoves go. It has a push button piezo igniter which eliminates the need for matches or a lighter to light the stove. While these do break and stop functioning eventually, they can be replaced and are quite convenient when they work. The pot is small but has heat retention coils on the bottom which help improve the overall efficiency of the system and provide the stove with some wind protection. A small 110g gas canister will fit inside the pot with the stove, and the lid holds all of the components inside for easy transport.

If there’s a limitation with the stove, it’s that it is nearly impossible to simmer with, which is a common fault of cooking systems like this which are mainly intended to boil water and not intended for heating anything up except hot drinks or thin soups. Part of the problem is that you simply can’t see the flame when the pot is locked into the pot stand that surrounds the stove and the other is that it goes out if you turn the stove down too low. If you want to cook pasta, like ramen noodles, your best bet is to boil your water and then let the noodles soak in the pot (see Forget Boiling: How to Cook Dried Pasta and Stretch Your Stove Fuel).

Eating from the Pot

If minimizing gear weight is a priority, you can discard the plastic cup and eat and drink from the cook pot itself. In my experience, the plastic cup is  easy to crack, so you’ll end up eating and drinking from the pot sooner or later anyway. It’s also one less thing to wash and keep clean.

The insulated cozy surrounding the pot has a fabric handle which is strong enough to hold the pot when contains hot liquid or food. However, it can also be a little tricky to disengage the hot pot from the stove/pot stand if you use the twist lock mechanism provided to lock the two together while cooking. I usually leave the pot deliberately unlocked, if a bit titled, so I can lift it off the combo stove/pot stand when my water has finished boiling.

The Jetboil Flash Lite Personal Cook System (PCS) boils water quickly and efficiently for making hot drinks or rehydrating pre-packaged backpacking meals. It’s very compact, ultralight, and self-contained when packed with a small fuel canister, ideal for multi-day or weeklong backpacking trips. If you need to boil water for multiple people or want to be able to simmer more complex 1-pot meals, you’d be better off getting the 1.8L JetBoil Sumo or the 1.0L Jetboil Minimo.

Disclosure: The author purchased this product with his own funds.

SectionHiker is reader-supported. We independently research, test, and rate the best products. We only make money if you purchase a product through our affiliate links. Help us continue to test and write unsponsored and independent gear reviews, beginner FAQs, and free hiking guides.
Previous Cat Crap Glasses Anti-Fogger
Next Tenkara Fly Fishing Gear List