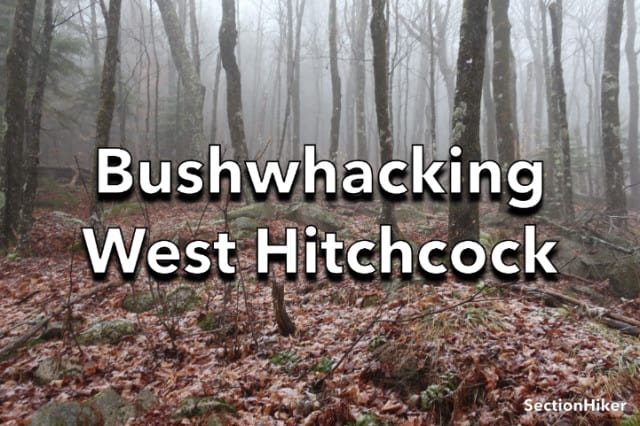 The Hitchcocks are a cluster of five mountains in the White Mountain National Forest just outside of Lincoln, NH. They’re all on the New Hampshire 100 highest list (and the NH500 Highest list I’m currently working on) and none of them have trails, so you have to bushwhack to the summits. A handful of people have climbed them all in one day, but that’s a tough tough hike because they’re non-trivial bushwhacks. Most people climb the peaks over multiple hikes.

This climb up West Hitchcock is the fourth peak I’ve climbed in the group. I climbed the East, South, and Central (main) peak previously, all on one hike, back in 2014. Now that I’m on an off-trail navigation jag again, I figured it’d be a good time to climb the West Peak before we got our first significant winter snowfall, so I headed out the day after Thanksgiving to climb it solo.

On paper, the route looked like a pretty straightforward ridge climb. This type of bushwhack is generally easier because you can follow the top of the ridge to the summit without the need for a lot of compass or GPS navigation. If you look at my track above, you can see how it tracks in the middle of the “C-shaped” topographic lines (that indicate a ridge) as it gets closer to the top of West Hitchcock.

Here’s a different view of the same route with enhanced terrain shading, which can make the ridge easier to visualize in 3D. As the track climbs, the terrain on either side steepens and appears to fall away. You often experience that same sensation when you’re walking in the middle of a ridge and you can see the sides dropping down steeply on either side. As long as you stay on top of the center spine, you can tell where you are without the aid of a map or compass. An altimeter comes in handy to tell you where you are elevation-wise on the ridge and how much farther you need to climb, but it’s not strictly necessary.

That was the plan anyway. The actual terrain proved a bit trickier to navigate by eye because the landscape proved to be less distinctly shaped than the map led me to believe. Topographic maps often lie, in that they project an idealized view of landscape, and smooth over its potholes and undulations. (See: Why do Hiking Maps Lie?)

While I managed to stay on course for the climb, I found myself falling off either side of the ridge on the descent because I couldn’t clearly see where the horizon lines fell away. I knew it was happening, so it was easy to get back to the middle of the ridge and back on track. But it was a little concerning because the weather was rapidly deteriorating and darkness was fast approaching.  The sun sets at 4:30 pm in late November and bushwhacking in the wet rain at night is to be avoided at all costs for safety as well as aesthetic reasons, because it’s a miserable experience.

I started this bushwhack on Fire Road #420, near the Lincoln Wood Trailhead on the Kancamagus Highway, which cuts through the Whites from east to west. These fire roads, in addition to snowmobile trails, logging roads, decommissioned hiking trails, and XC trails, are their own hidden trail system providing convenient access to more remote areas in the National Forest. They’re not depicted on most hiking maps, but they’re out there if you know where to look.

I followed the fire road to 1400′ before heading out into open woods to the bottom of the ridge leading up to West Hitchcock starting at 2100′. It had been drizzling slightly when I started hiking, but I shrugged it off because the forecast called for cloudy weather, but no precipitation. I had a full set of layers in my pack, of course, including rain gear, several pairs of gloves, hats, a down jacket, and down pants.

The lower part of the ridge was flattish and relatively indistinct, but I could see the incline in the terrain and started climbing. The ground was saturated from recent rain and I hit a band of birch saplings pretty quickly which were easy to hike through, but still held some residual moisture that made my pants damp. It was still drizzling with low cloud cover and I wondered whether I get any kind of view at the top.

The ridgeine became much more distinct by 2500′ and the rain heavier. I put on my rain jacket and rain pants as freezing rain began to fall. The woods were quite open now but the terrain was increasingly rocky as I continued climbing. The ridge was now starting to curve toward the summit plateau and I was careful to avoid losing elevation by getting sidetracked down one of the sides.

By the time I hit 3000 feet, the freezing rain had turned to wet snow. I was close to my goal though and still feeling good. The summit area of West Hitchcock has a lollipop shape and gets fairly flat. It’s also filled with a lot of blown down trees and debris, that I had to pick my way through to get to the other side. That was much slower going, but I found the summit canister fairly quickly, signed the logbook, ate a sandwich, and started heading back down the way I’d come.

By now, my rain gear has wet out from perspiration and saturation, but I was still warm and my sandwich, which was loaded with honey, perked me right up. I picked my way back through the flat lollipop section of the summit and started to head downhill.

I started descending and recognized some of the “landmarks” I’d noticed on the way up. But I kept repeatedly falling off the ridge to the southeast, which would have taken me out of the way on the descent and required a lengthy walk at the end to get back to my car. I had the compass out at this point and my GPS, but I was not sticking to the line I wanted. On hindsight, it’s probably because my bearing was changing constantly from 3000′ to 2500′ because the ridge was curving southwest. The matter resolved itself by about 2500′ when the ridgeline straightened up again and I was able to quicken my pace. By then it had started to pour rain, so I was motivated to get out of there and made it back to my car in good time.

Philip Werner has hiked and backpacked over 7500 miles in the United States and the UK and written over 2500 articles as the founder of SectionHiker.com, noted for its backpacking gear reviews and hiking FAQs. A devotee of New Hampshire and Maine hiking and backpacking, Philip is the 36th person to hike all 650 of the hiking trails in the White Mountain Guide, a distance of approximately 2500 miles, completing a second round in 2021. Philip is the author of Backpacking the White Mountain 4000 Footers, a free online guidebook of the best backpacking trips in the White Mountains in New Hampshire and Maine. He lives in New Hampshire.
Previous Winter Bivy Sack Guide 2020
Next Bushwhacking West Moat Mountain and Spruce Hill