Winter Traction and When to Wear It 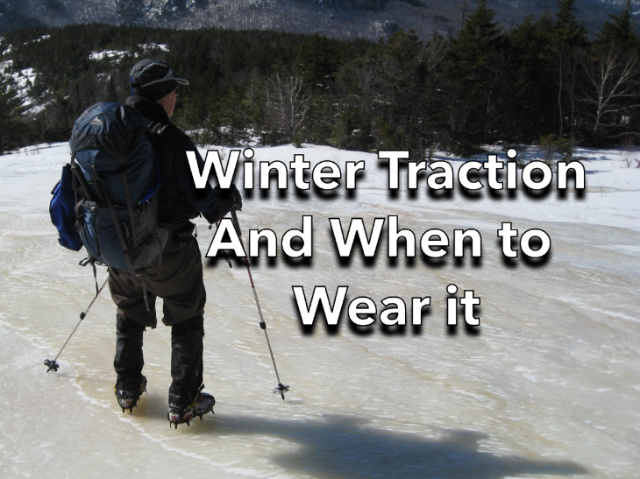 However, putting on microspikes, mountaineering crampons, or snowshoes prematurely can tire you quickly if you’re hiking on a trail or up a mountain that is going to stretch your physical limits. The best strategy is to only put them on when you need to and not before.

When should you put on microspikes?

Microspikes are best worn on fairly level hiking trails covered with packed snow or ice. They provide that little bit of extra bite that you need to when your boot treads stop giving you good traction. A winter driving analogy is useful here: regular boots are like winter snow tires, but when they start sliding, you put on tire chains to get more traction.

However wearing microspikes means added weight on your feet (an extra pound), which can wear you out prematurely on a long hike. It’s often possible to defer putting them on with better footwork, especially on packed snow. For example, if you splay your feet out and walk like a duck uphill, you can often coax a little more traction out of your boots.

When should you put on mountaineering crampons?

Mountaineering crampons are best worn on higher angle ice, ice-covered rock, or mixed ice and bare rock when you need a deeper bite and more solid footing to climb a slope. The chains and spikes on microspikes have too much “give” in them and are too short to penetrate deeply into ice when you need them to hold your full body weight. Heavier duty crampons also have front points, that you can kick into vertical ice to get a toehold when none exists.

When should you put on snowshoes?

Snowshoes have two functions: they provide flotation so you don’t sink as deeply into powdery or deep snow, which helps conserve your energy. They also prevent post-holing which occurs when you sink into snow up to your thighs or waist. Snowshoes also have integrated crampons on their undersides that help provide traction on ice or packed snow and can be used instead of crampons in low-angle situations.

If you compare snowshoes, you’ll find that the ones with the greatest surface area are best for snowshoeing on powder and that smaller and narrower ones are better for walking on broken-out winter trails. There’s also a fair amount of variety in the aggressiveness of the underlying crampons on snowshoes. Teardrop-shaped crampons like the ones on Tubbs Snowshoes tend to have fewer crampon teeth than MSR Lightning Ascent Snowshoes, where the frame itself acts like a crampon.

SectionHiker is reader-supported. We independently research, test, and rate the best products. We only make money if you purchase a product through our affiliate links. Help us continue to test and write unsponsored and independent gear reviews, beginner FAQs, and free hiking guides.
Previous Hiking The New Hampshire Triple Crown
Next What are the Advantages of Lightweight Double-Wall Tents?